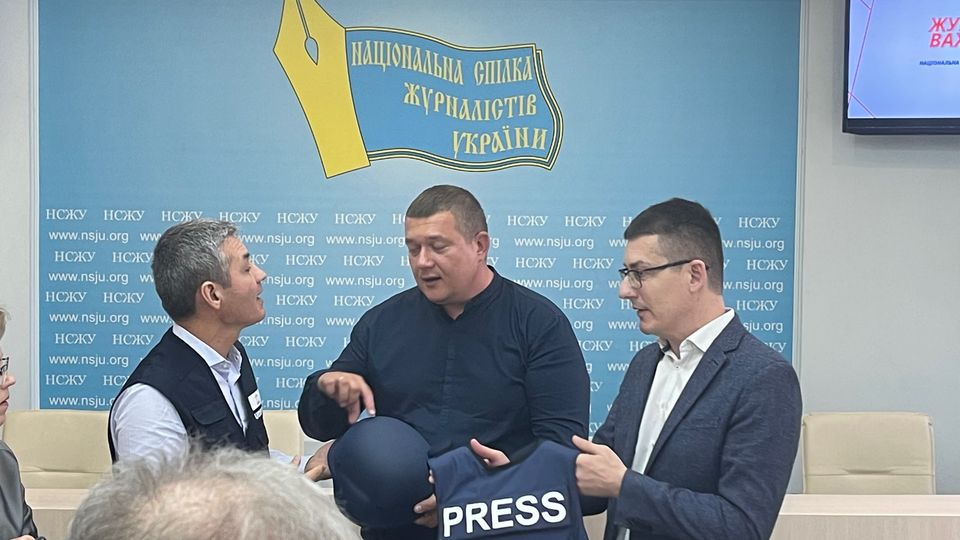 Andriy Kovalenko, Executive Director of AUP, explains to Mehdi Benchel, Senior Project Officer for Freedom of Expression and Media Development, UNESCO Communications and Information Sector, why a journalist’s message during the war should not be labelled “TV”, as is the custom in the world, but only “Press”.

“The Russian occupants used the lighter “V” as their mark during the attack on Kyiv in February and February,” Andriy Kovalenko said. – They did not follow and do not follow the norms of international humanitarian law and shoot civilians, journalists, volunteers and medics, despite the fact that they are not combatants. The letter “V” is now not only a symbol of the occupants but also a unit for all Ukrainians. Soldiers can shoot without having any knowledge of other lyters on automatic reflex. And it is important to blame them after the events in Irpin and Buchi. That is why it is always better to use “PRESS”.

The event was organized by the National Union of Journalists of Ukraine (NUJU).

The roundtable was also timed to coincide with the delivery of 100 special protective equipment packages (bullet-proof waistcoat + scarf) for journalists to Ukraine that were requested by the National Confederation of Journalists of Ukraine with the support of UNESCO.

The Academy of the Ukrainian Press organized and supervised the visits of some 40 foreign journalists to Ukraine in 2022, having been active since the beginning of the Russian invasion.