Home News VISIT OF FOREIGN REPORTERS TO UKRAINE IN OCTOBER 2019 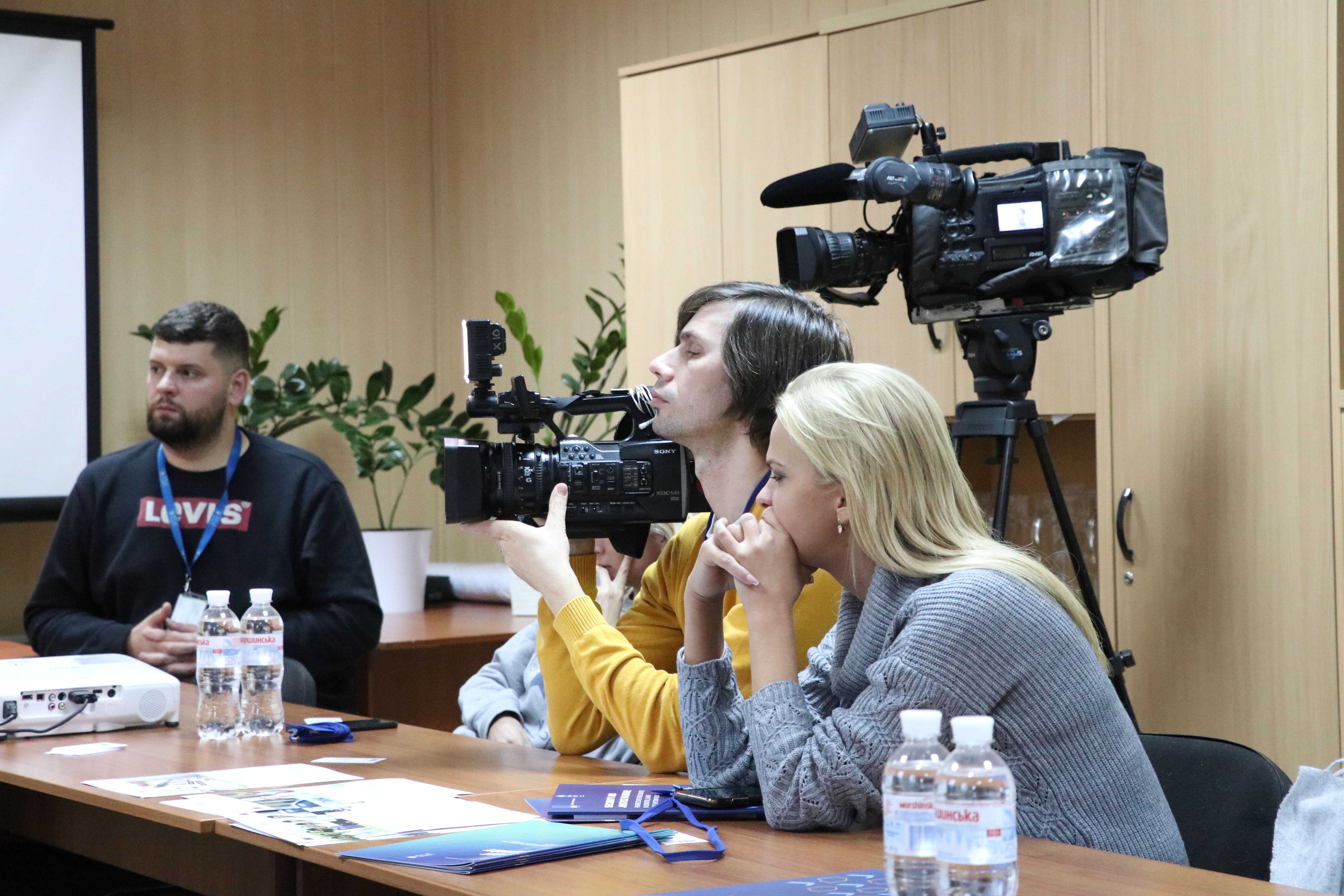 VISIT OF FOREIGN REPORTERS TO UKRAINE IN OCTOBER 2019

On October 28 – November 1, 2019, the Academy of Ukrainian Press (further AUP) had an honor to invite representatives of foreign media to participation in the project “Press Tours to Ukraine” which is realized due to the support of Media Development Foundation, the Embassy of the USA to Ukraine.

Top reporters from Georgia, Germany, Hungary, Latvia, Romania, and Turkey who work on different media platforms visited Kyiv, and several towns of Donetsk region controlled by Ukrainian government later on. All the series of press tours are aimed to demonstrate the real situation and events taking place in our state and in the eastern part of the country to foreign reporters; to introduce the perspective vision of national experts in different fields of development and opinion of society on various issues.

Participants of the 1st press tour in October, 2019 became:

On October 29, 2019, tour participants visited Hromadske Radio, non-commercial and non-governmental news&talk radio station and Internet media platform. They spoke there to Kyrylo Lukerenko, executive manager. During the meeting, foreign reporters learned about the history of media and media business development in Ukraine, as well as heard about the number of successful projects realized by Hromadske Radio and the perspectives of radio broadcasting in general. The speaker told: “We were established in 2013, having initially the website, social media platforms and podcasts for communication with the audience. In summer 2014, we established a real radio station with an editorial policy. Now, we have 17 frequencies across Ukraine, as far as I remember. Our monthly audience makes about 40 000 listeners. We have been running our talk show together with a big public broadcaster for six years. Since 2015, we received the first license to broadcast in Donbas. And I would say that 40 percent of our information is focused on the audience living in Donbas”. 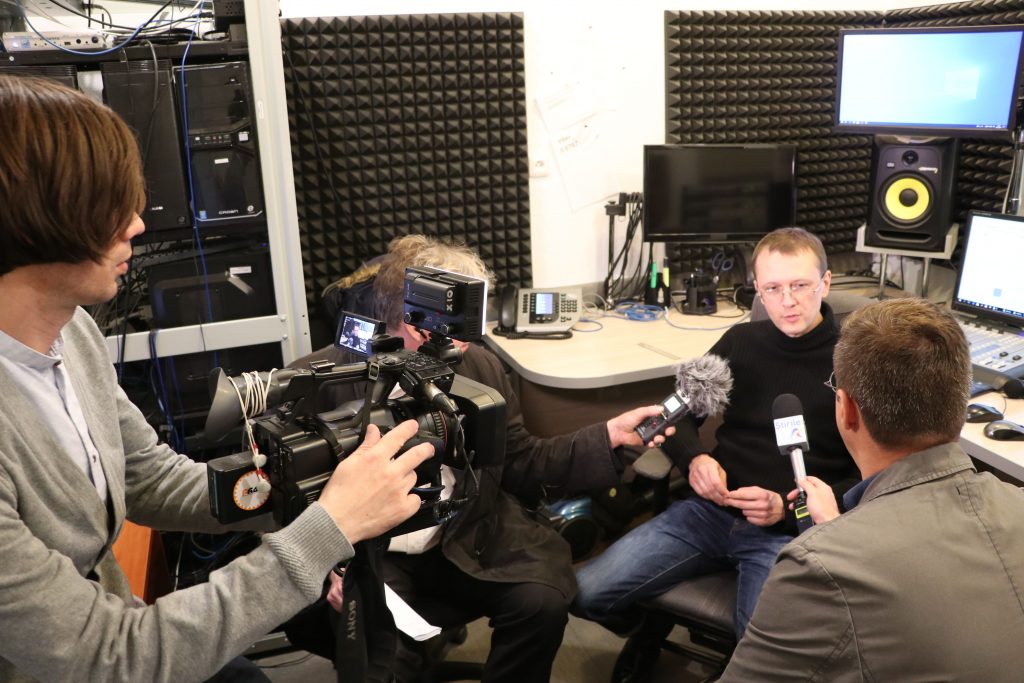 On the same day, foreign reporters met Rostyslav Pavlenko, MP, European Solidarity Party, who told about the ideology of his political force, his role in recognition of Ukrainian Orthodox Church as an independent one.  He also answered the questions of reporters regarding the partnership with the governments of other countries, countering the issues of corruption in Ukraine, expectations of people, etc. “According to the law, self-government can be implemented if and only if there will be free and fair elections in accordance with the OSCE standards providing security prerequisites…” Mr. Pavlenko expressed his opinion on the elections in Donbas. 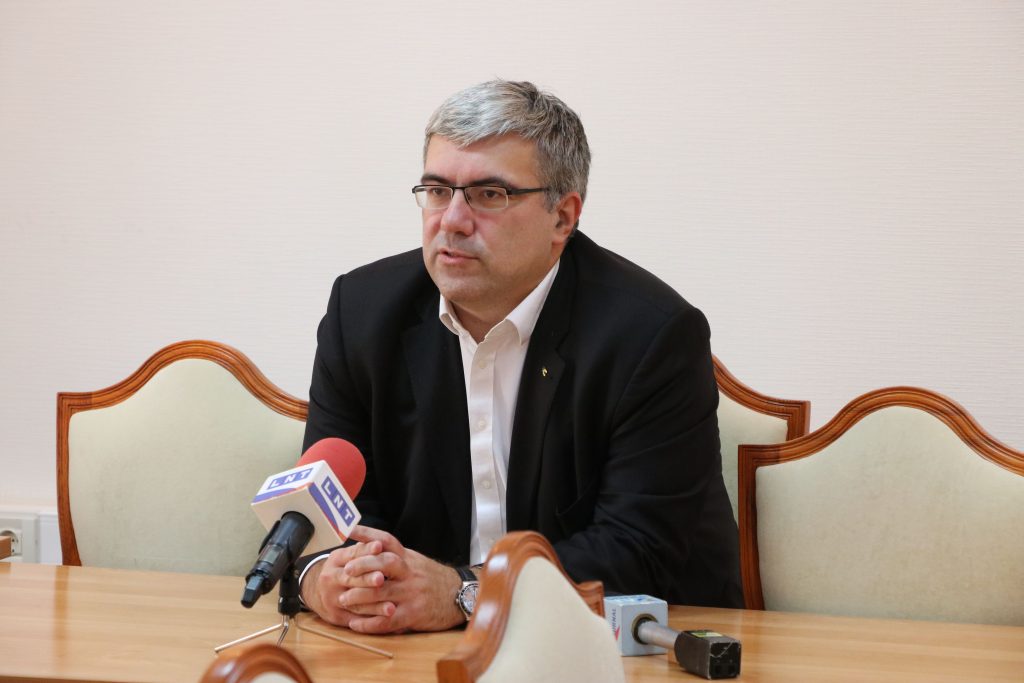 Then, the participants went for an excursion around “Mezhyhiria” the former residence of flown ex-President, V. Yanukovych. Foreign reporters expressed their surprise regarding the typical to monarchy attributes of former Ukrainian government.

Afterwards, the team of reporters spoke to Yevheniia Kravchuk, MP, Servant of the People Party. Ms. Kravchuk told: “On the first days of parliamentary activity, we formed the Cabinet of Ministers. They called themselves as ‘technocrats’. Five current Ministers came from the faction, and the rest of them, apart from one, are absolutely new to politics. In our faction there are not any previous MPs. All our members are new and never occupied high political ranks. We’ve finished adopting a huge amount of laws for the last two months. We cancelled immunity of the MPs and adopted the law on impeachment. We are also planning to implement a huge privatization and economic reform.” 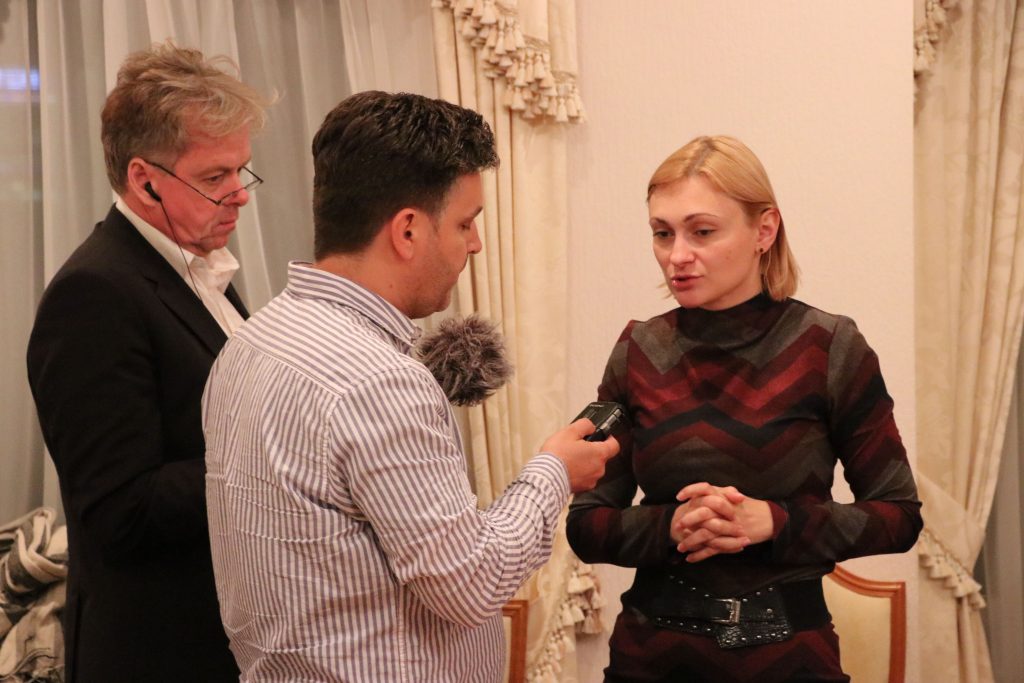 On October 30, 2019, journalists and organizers travelled to the east of Ukraine. First of all, we visited school #22 of Sloviansk Municipal Council in Semenivka (Donetsk region). The school was completely destroyed during the military actions and renovated after the town liberation from separatists. We talked to the vice-principal, Myroslava Horuzha, on its history and restoration. After that, the reporters observed hospital buildings ruined by war not far from the school. Our next location was UNDP office in town Krmatorsk. 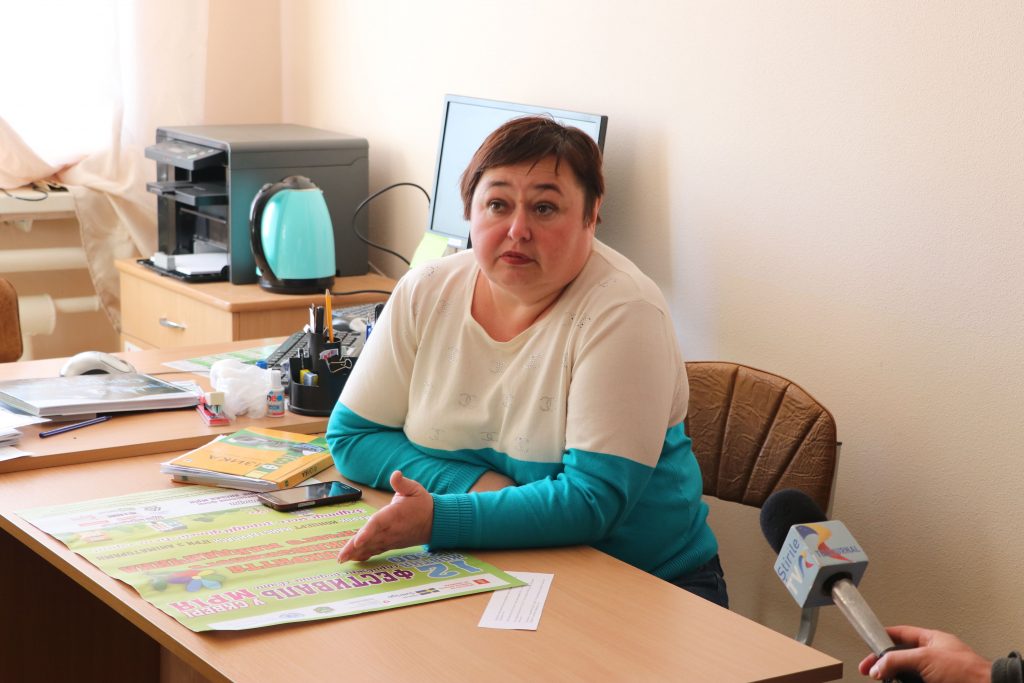 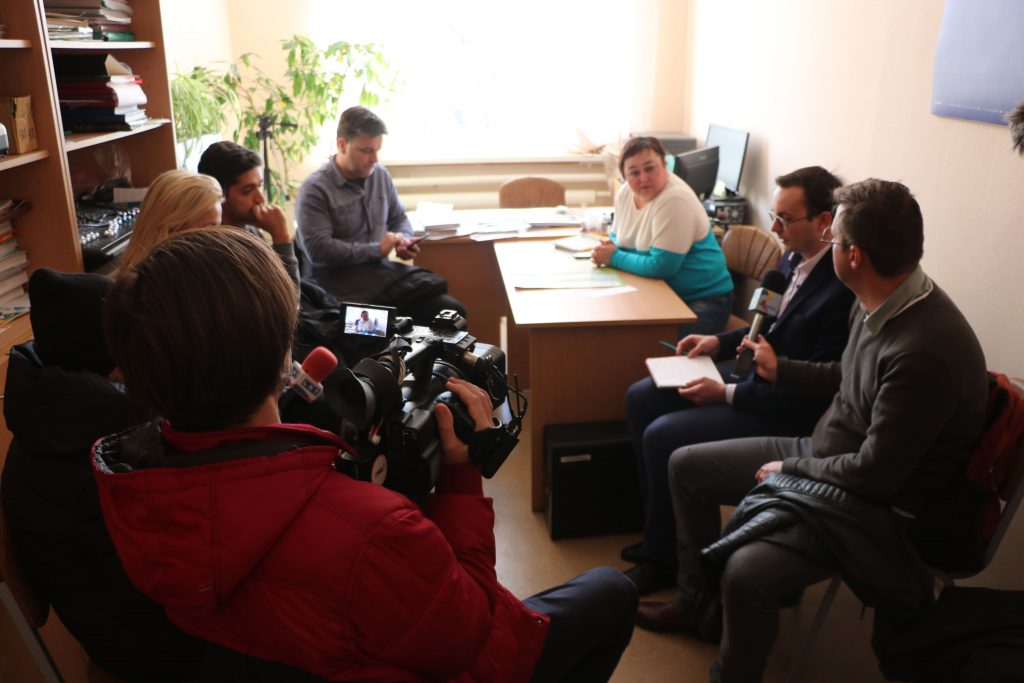 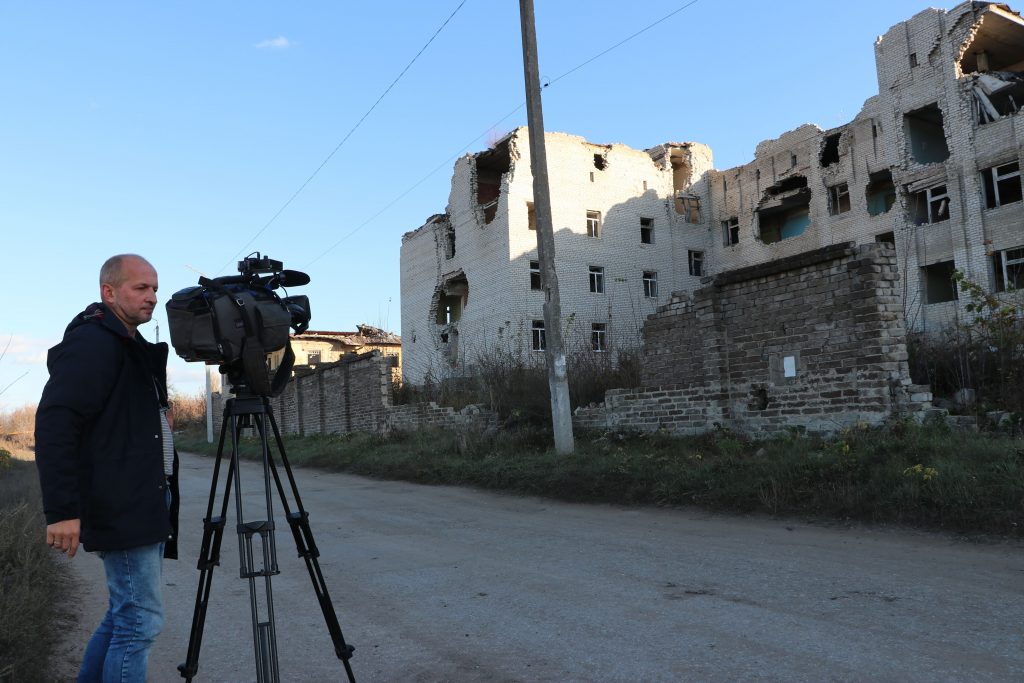 Rustam Pulatov, program coordinator (Community Security and Social Cohesion component), and Maksym Kytsiuk, communication associate, told the participants about the UNDP’s activities in Donbas, including economic recovery, restoration of critical infrastructure, local governance, implementation of decentralization reform, community security and social cohesion. “We work with civil society, with communities, journalists and media, state government bodies, police, emergency services, start legal aid systems, and regional administrations, and help to establish communication among these structures. For example, we enter a community and ask active citizens on the problems in development and if they want to discuss this with the local authorities. So, they can voice their concerns and the authorities will listen and decide what to do with this. We, on our behalf, will be able to provide some small funding for one’s project,” said Mr. Pulatov. 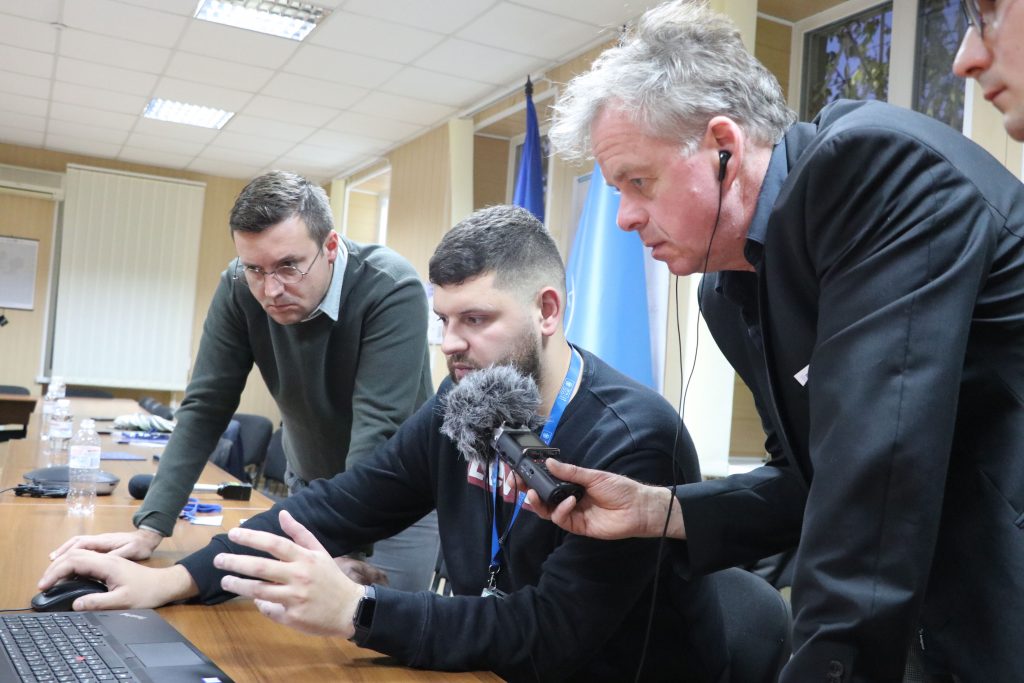 On October 31 – November 1, 2019, the group of journalists visited town Mariupol.

While visiting the Mariupol Shipyards, we talked to Oleh Turskyi, General Director, and Larysa Konieva, Press Service Head, we were convinced that not only quality ship repair is taking place here, but they also have all the possibilities to build new vessels. We have discussed the cooperation with international ship-owners, activity during the war, Kerch Strait blockade, and the situation when despite of cancellation of huge contracts because of entering risks, the enterprise still provides services to different types of vessels, involves new experts and has industrial potentials. 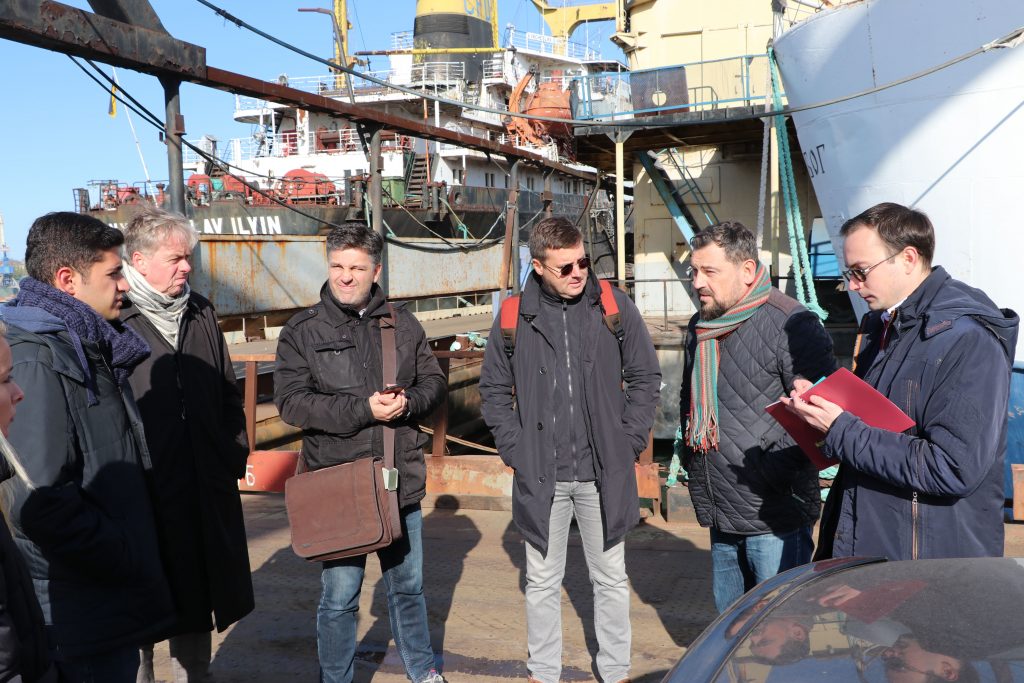 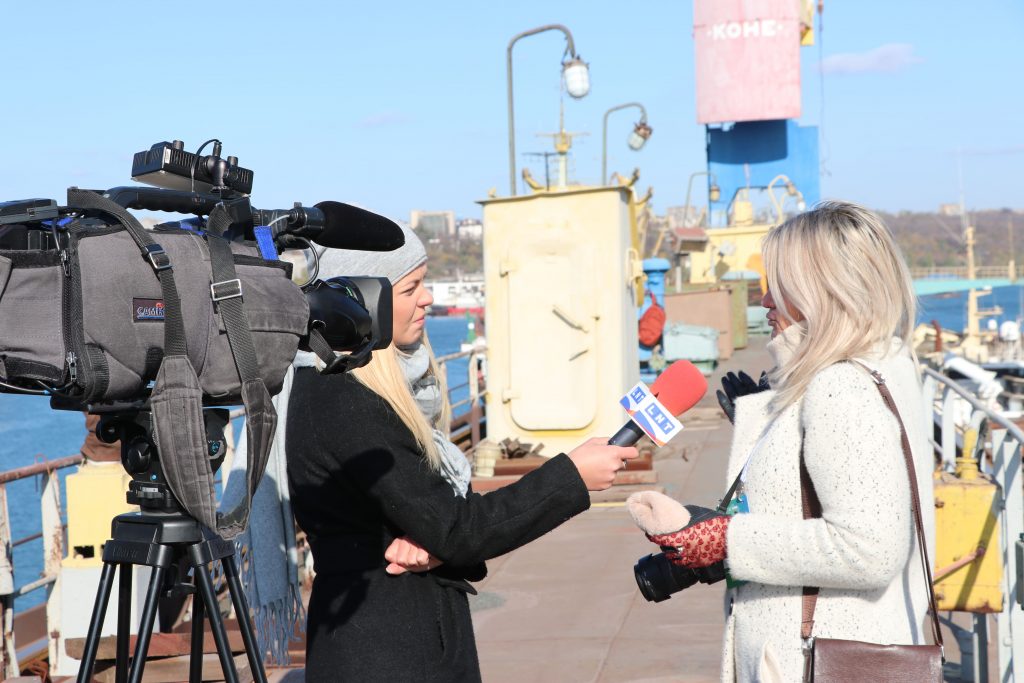 Then, we were at the cardiology medical center, where Serhii Orleanskyi, Chief Doctor, told how the procedure for reception of patients is going, and showed new equipment for treatment of heart attacks. 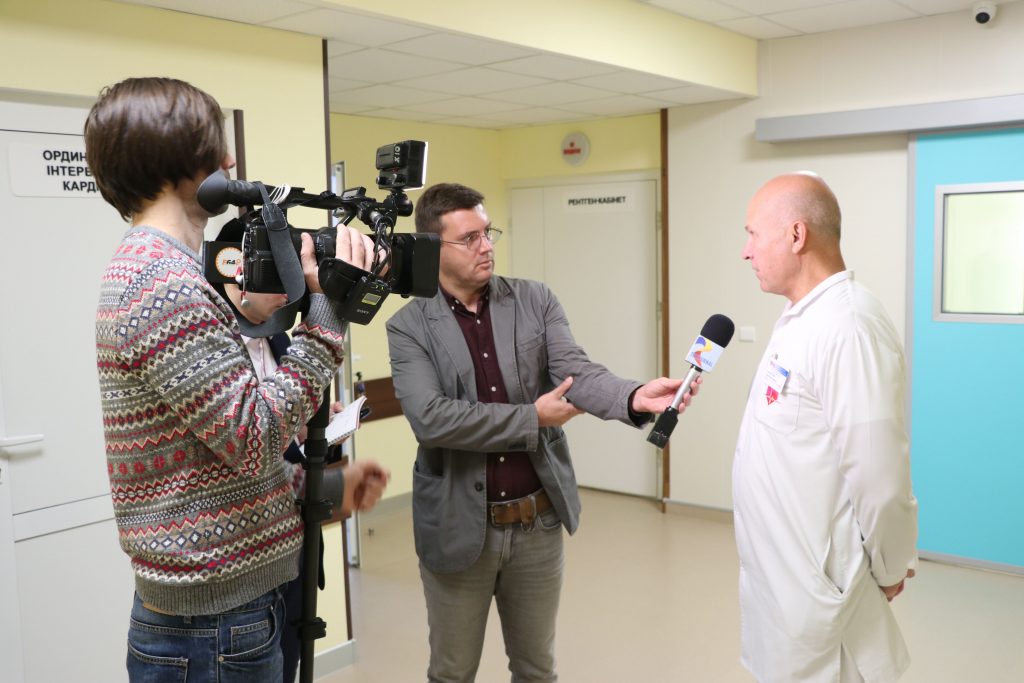 On the next day we spoke to Mykhailo Kohut, First Deputy Mayor of Mariupol. Mr. Kohut outlined the strategy of town development, opportunities for internally displaced people, and actions of municipal government to improve providing public utilities. 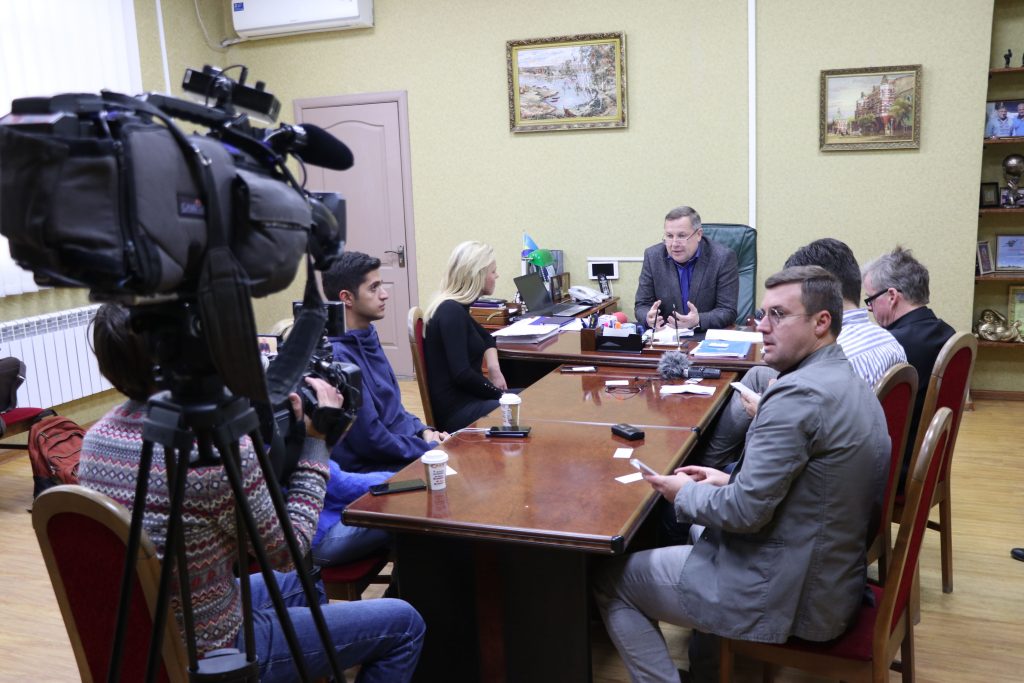 Then, we visited Mariupol Center for Providing Administrative Services. Foreign reporters had an excursion around the Center and were told what services citizens can receive in a short term. 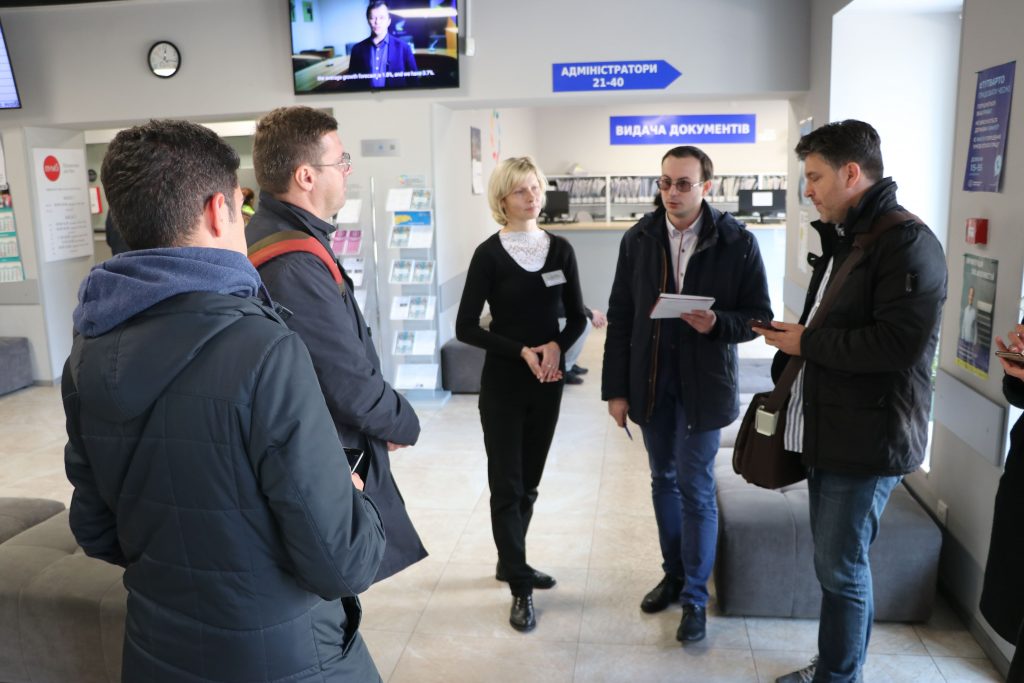 Next, our guests took part in the excursion with the tour-guide Olena Deinychenko, member of National Union of Ethnographers. We received an opportunity to learn the town history, its cultural heritage, industrial potential, and to enjoy the views over the Sea of Azov. 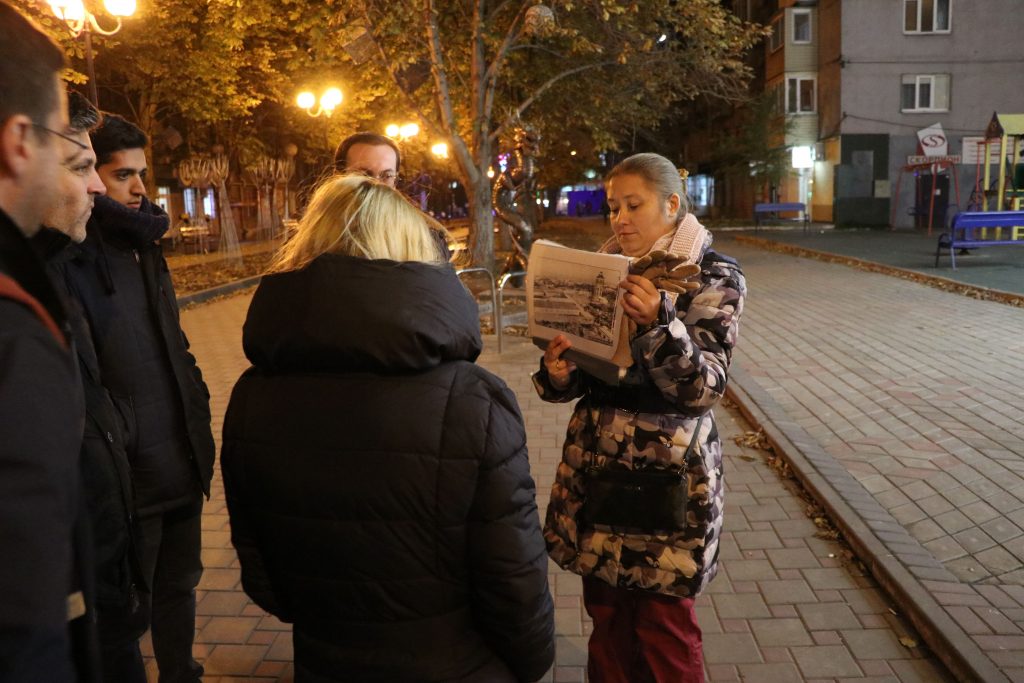 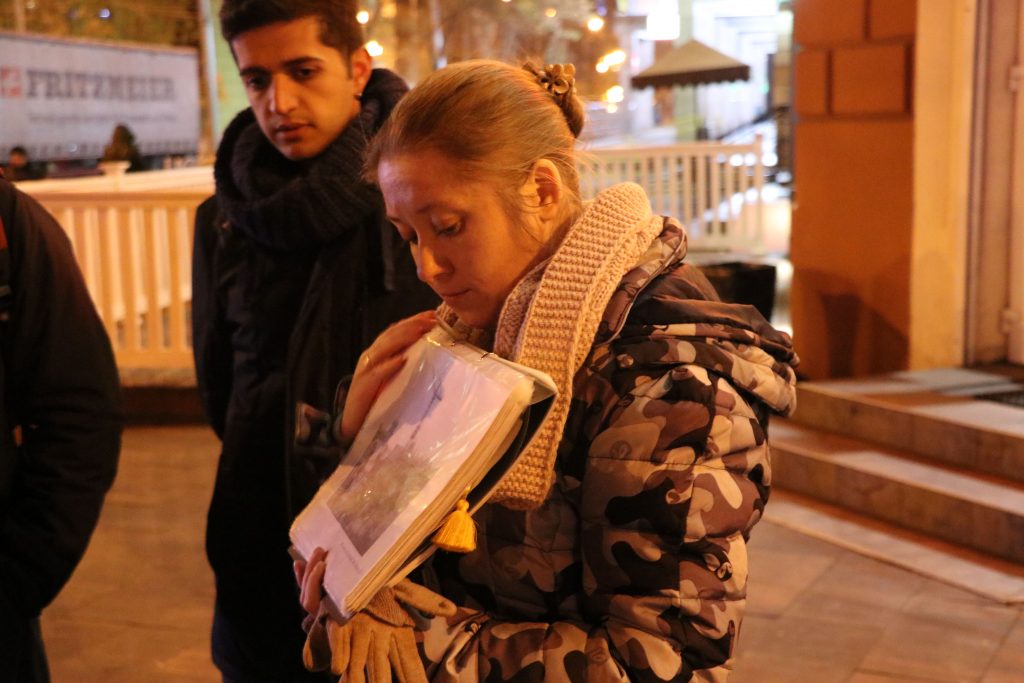