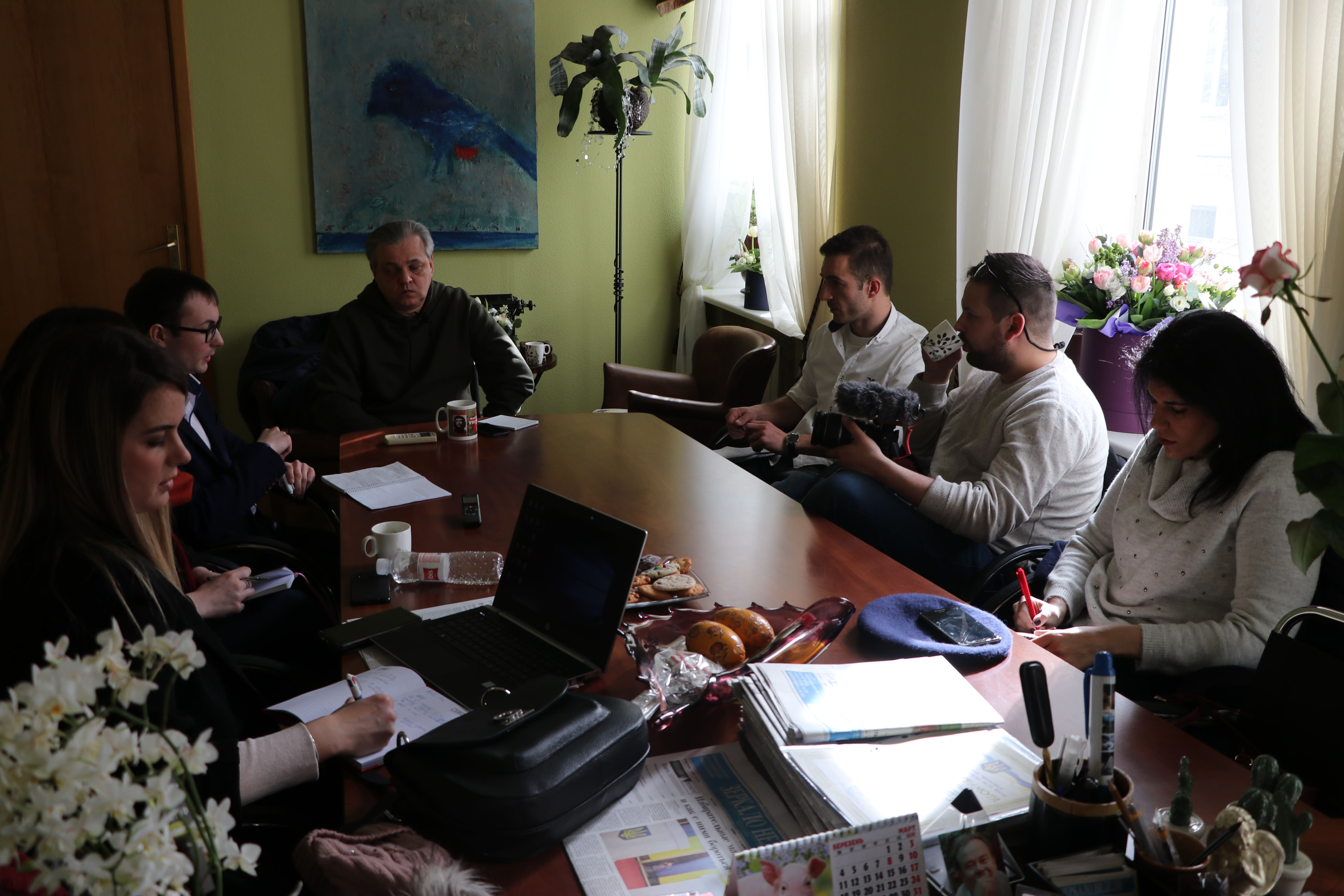 On March 12-16, 2019, the Academy of Ukrainian Press (further AUP) had an
honor to invite representatives of foreign media to participation in the project
“Ukraine Press Tours” which is realized due to the support of Media Development
Foundation, the Embassy of the USA to Ukraine. Top reporters from Latvia,
Poland, Hungary, Montenegro and Turkey who work on different media platforms
visited Kyiv, and several towns of Donetsk and Luhansk regions later on.
All the series of press tours are aimed to show foreign journalists the real situation
in Ukraine and in the east of the country, as well as to introduce the perspective
expert vision and opinion of society on various issues. A 5-day program was quite
intensive and provided such an opportunity.

On March 12, 2019, we visited the editorial office of “Dzerkalo Tyzhnia”
(Weekly Mirror) newspaper and talked to Volodymyr Mostovyi, its founder, and
Serhii Rakhmanin, deputy editor-in-chief. The speakers told us about history of
newspaper, its activity, principles and values of the team, the ways of countering
pressure from public officials, as well as on professional coverage of election
campaigns. On the same day we had a meeting with Oleksandr Levchenko, Advisor to the
Minister of Temporarily Occupied Territories, Ex-Ambassador of Ukraine to
Croatia as well as Bosnia and Herzegovina (2010-2017). In the building of
Ministry, the Advisor told our press-tour participants about the real situation on the
occupied territories and represented a set of activities that should be done to solve
the conflict issues, as well as the perspectives for implementation of UN peace
keepers in Donbas. Also, all the present could discuss the peculiarities of
international affairs development with Ukraine. 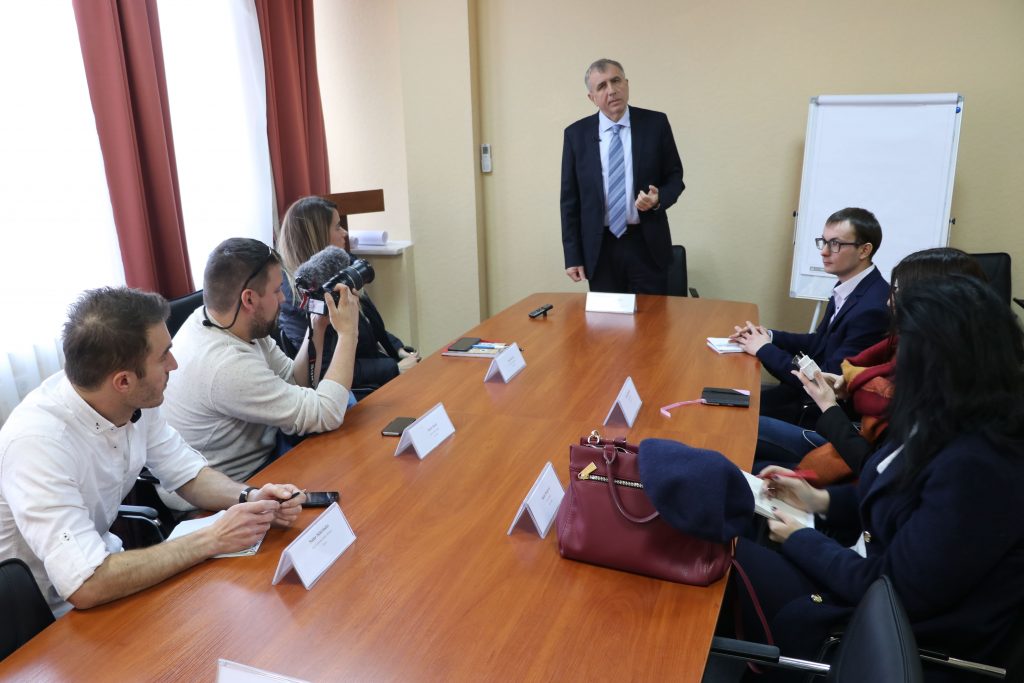 Then, the participants became guests at studio of Hromadske Radio. They spoke
there to Andrii Kulykov, Head of Supervisory Board and anchor of Hromadske
Radio. During the meeting, foreign reporters learned about the history of media
and media business development in Ukraine, as well as heard about the number of
successful projects realized by Hromadske Radio and the perspectives of radio
broadcasting in general. At the end of the day, the participants went for an excursion around “Mezhyhiria”
the former residence of flown ex-President, V. Yanukovych. Foreign reporters
expressed their surprise regarding the typical to monarchy attributes of former
Ukrainian government. 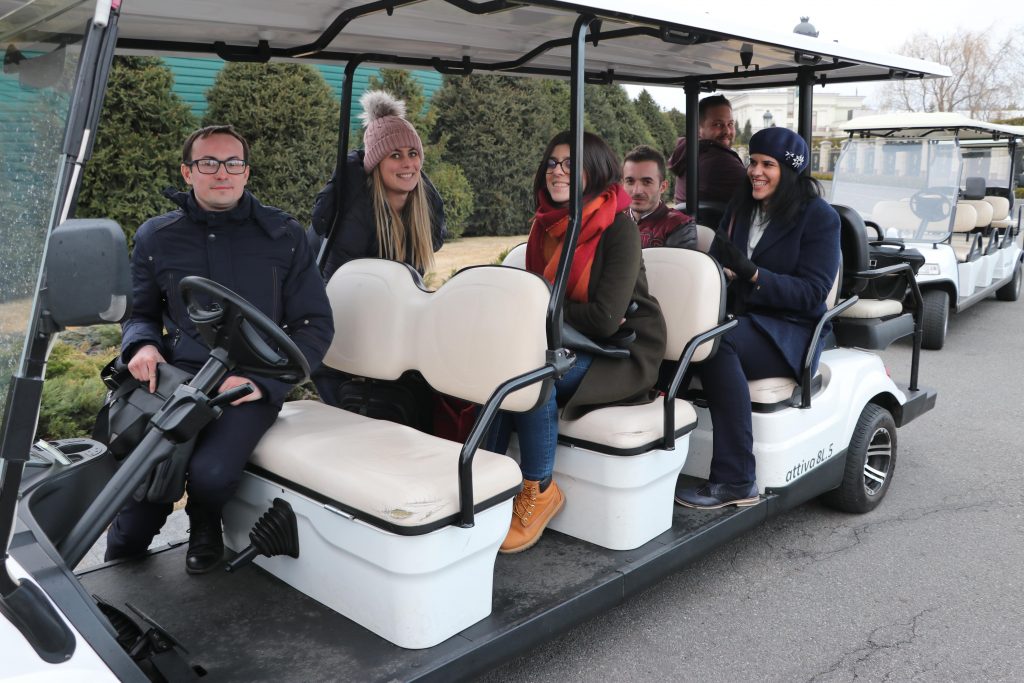 On March 13, 2019 journalists and organizers travelled to the east of Ukraine.
First of all, we visited school #22 of Sloviansk Municipal Council in Semenivka
(Donetsk region). The school was completely destroyed during the military actions
and renovated after the liberation of the towns from rebels. Serhii Borysenko,
school principal told about its renewal. 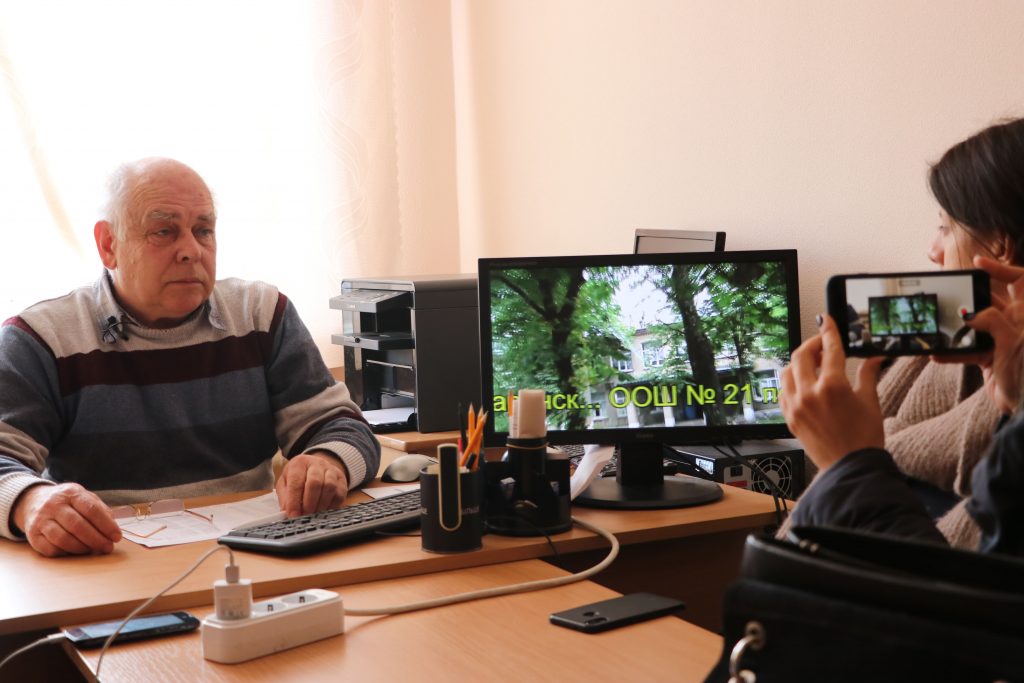 Then, foreign reporters met with representatives of crisis media center “Siverskyi
Donets” in town Severodonetsk (Luhansk region). Serhii Piatnytsia, its team
member, outlined the history of media center foundation after the liberation of the
town from militants as the initiative of active citizens, not indifferent to their town
development, and free platform for expressions. He mentioned that the center is
executively informing citizens on the emergency events and keeping in touch with
the national police. Arif Bagirov, civic activist and blogger answered the questions
on how the town lived before, during the occupation and after its liberation from
militants. 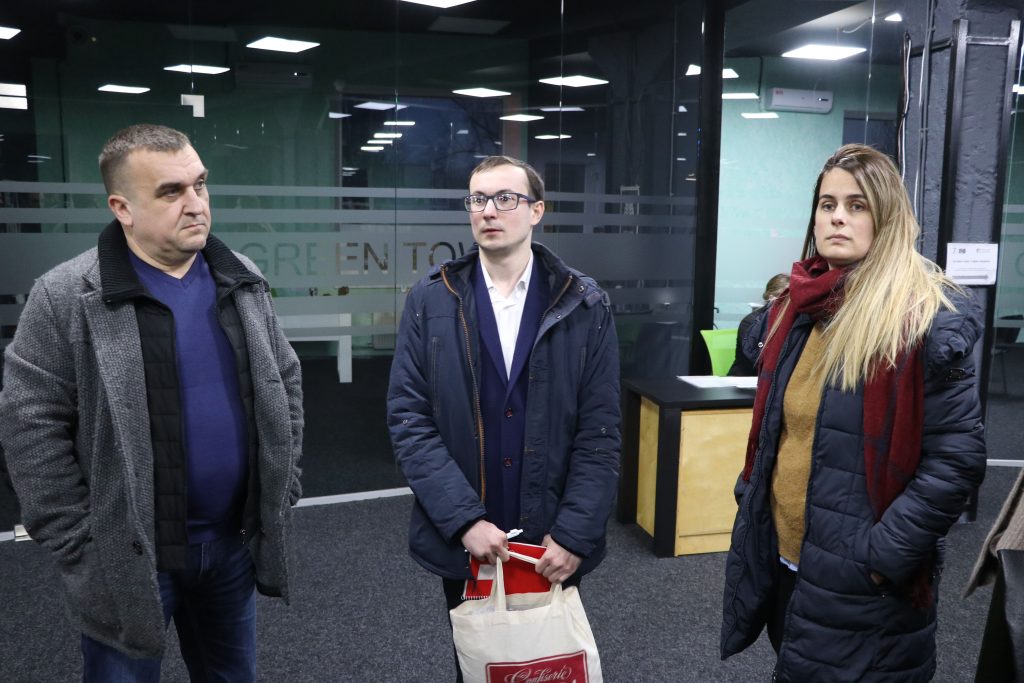 We also talked to Mykhailo Ivonin, Director General (CEO) at “Water Treatment
Technologies” Scientific and Research Project Institute and Head of “Greentown”
business hub in town Severodonetsk. Due to this speaker, we learnt a lot about the
small and medium business development, social entrepreneurship, opportunities
for business education on a local level, etc. 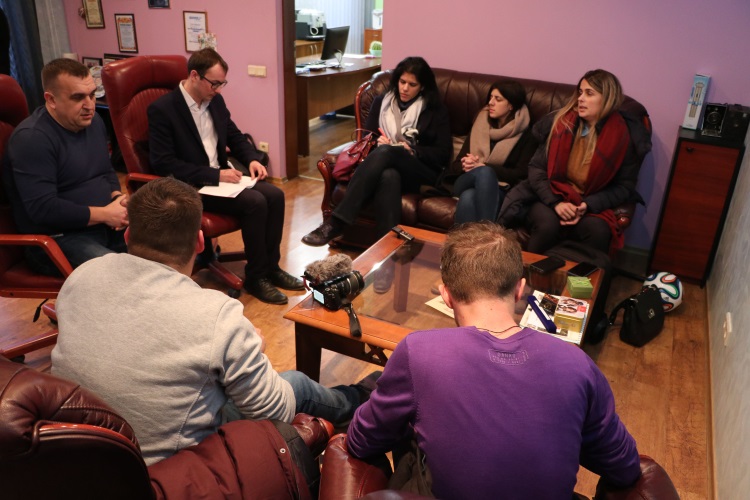 On March 14-15, 2019 the participants visited Maiupol port. We had a
conversation with Oleksandr Oliinyk, Director of State enterprise “Mariupol Sea
Commercial Port”. We have discussed the issues of cooperation with international
ship owners, activity during the war, Kerch Strait blockade, infrastructure in the
region, engagement of experts and industrial potentials. Despite of losses and longterm search of vessels in the Azov Sea by the Russian Federation, according to
Oleksandr, Mariupol port is endeavoring to find the alternative ways for solutions:
by building new terminals, attracting foreign investments, implementing the energy
efficient technologies, looking for new infrastructure opportunities 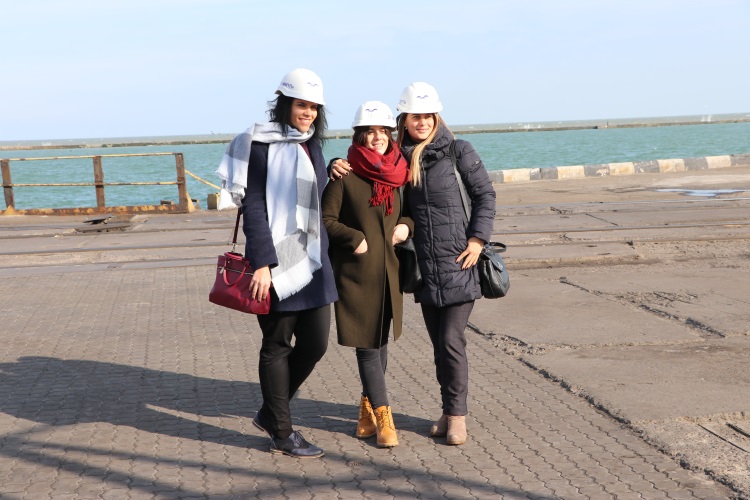 Afterwards, the reporters met Serhii Orlov, deputy mayor on activities of local
executive bodies, in the building of Mariupol Municipal Council. The speaker told
about strategy of town development till 2021, implementation of social programs
for citizens and internally displaced people, level of citizens’ satisfaction with
comfortable life in the town. 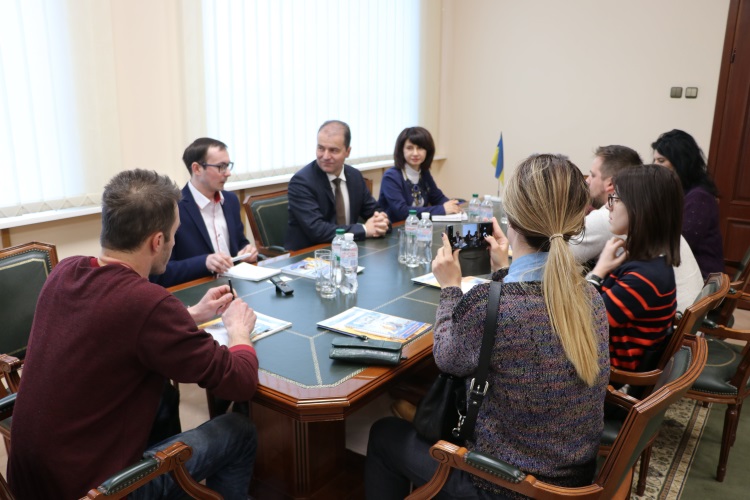 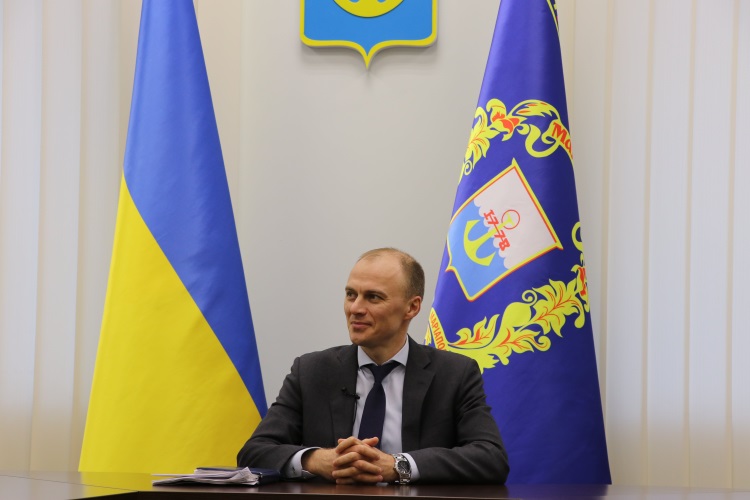 On March 02, 2019 the group of foreign journalists had an excursion around Kyiv.
They visited St. Sophia and St. Michael Square, St. Andrew Rampart,
Independence Square (Maidan Nezalezhnosti), observed a lot of other historic and
sightseeing places.

Due to the intensive and balanced visit program, we enabled to achieve the main
goals: provide foreign reporters with the reliable information sources, tendencies
of development in Ukraine. The reporters met eminent newsmakers and opinion
leaders. We do not doubt that the number and quality of reportages about
Ukraine will increase on the guests’ return.

The Academy of Ukrainian Press with the support of Media Development
Foundation, Embassy of the USA to Ukraine, is involved in ultimately efficient and
trustworthy informing of the foreign colleagues on events in Ukraine. Let you join
us! The world has to know the truth and avoid fakes. 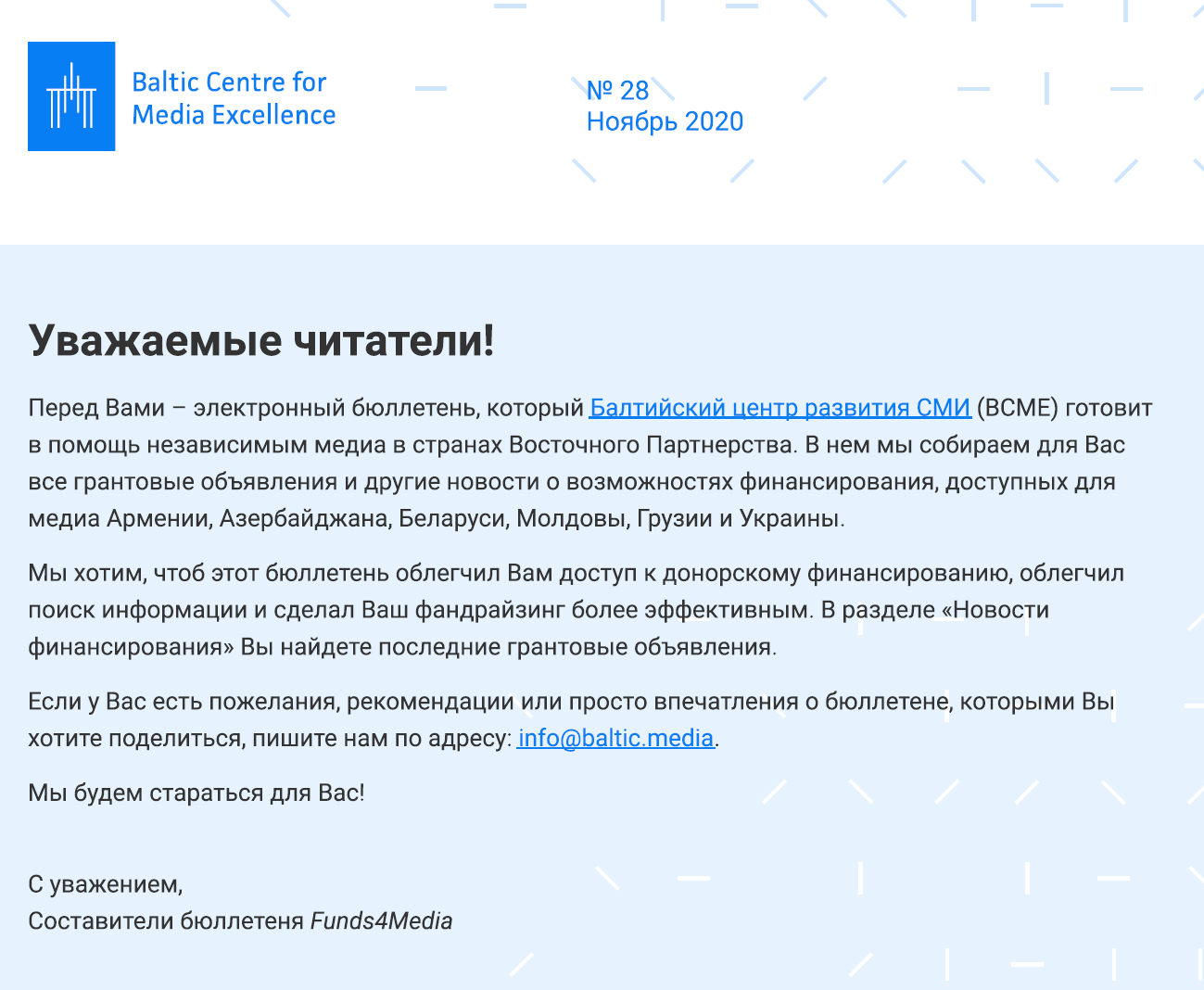