Home News Open Letter of the Ukraine Commission on Journalism Ethics regarding the pressure made on Valeriy Ivanov, President of the Academy of Ukrainian Press 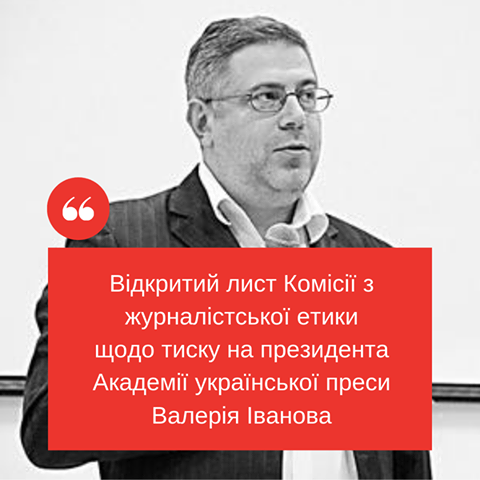 Open Letter of the Ukraine Commission on Journalism Ethics regarding the pressure made on Valeriy Ivanov, President of the Academy of Ukrainian Press

The Ukraine Commission on Journalism Ethics, supported by the leading journalism and media CSOs of Ukraine, is lodging a strong protest against the crude pressure made on our colleague, Prof. Valeriy Ivanov, Doctor of Philology, President of the Academy of Ukrainian Press, by the investigative authorities of National Police!

An outrageous campaign against our colleague has been running for already more than three months in a line: the access of prof. Ivanov’s family to bank accounts is restricted; a house search has taken place; respected national and international organizations are receiving the requests from investigators, aimed at undermining the reputation of leading scholar and civic activist.

In particular, the Ukraine Commission on Journalism Ethics also received the request from the Central Investigation Department of National Police of Ukraine # 1383/24/9/2-2019 on the activity of Commission and its relations to Valeriy Ivanov who belongs to the organization members.

We are recognizing the right of National Police to respond to any possible law violations and carry out pre-trial investigations. However, the pre-trial investigation of criminal proceeding included into the single register of pre-trial investigations under the no. 42015000000002145 from 5.10.2015 does not concern Valeriy Ivanov and his activity, this refers to the advertising business of his adult son, Denis. Accordingly, investigative authorities should not make pressure on parents in their effort in their 4th year to investigate the case regarding the independent economic activity of Denis Ivanov. Furthermore, the case was dismissed in 2017 but it was renewed in three months after the beginning of media project on investigation of possible corruption contacts within the management of investigative authorities, National Police.

Already in May, 2019 Valeriy Ivanov, President of the Academy of Ukrainian Press, lodged his strong protest against the house search and an outrage made to his family by investigators.  That search was carried out in accordance with one more case, where our colleague was accused of data collection regarding one of the executives at the investigative authorities, National Police with the aim of extortion and blackmail. At that time, the National Union of Journalists, respected civic activists and national media supported our colleague. Their concerns regarding the pressure on Valeriy Ivanov also expressed the representatives of leading non-governmental media organizations, non-members of Ukraine Commission of Journalism Ethics (Ukrainian Association of Media Business, Detector Media, Institute of Mass Information, Center for Human Rights “ZMINA”, National Association of Broadcasters), foreign media (Deutsche Welle). The U.S. Embassy to Ukraine expressed its concern. Unfortunately, the argumentative opinion of civil society is consciously neglected by investigative authorities, that is confirmed by sending the requests that tarnish our colleague’s honest reputation.

The pressure on prof. Ivanov by itself attained an absolutely uncivil form.  The full-fledged range of ‘black’ PR is used against our colleague. So-called ‘biased’ websites published the investigation records, and the provocateurs visited the events with his participation.

The Ukraine Commission on Journalism Ethics is appealing to the Ministry of Interior Affairs, its management and National Police with the call attentively to learn the circumstances mentioned in this letter and to protect our colleague from unreasonable accusations and pressure. Valeriy Ivanov has achieved undoubtful acknowledgments among journalists and diplomats for his long-standing educational activity and protection of free speech in Ukraine, therefore the current conflict is a sensitive topic for the media.

Andrii Kulykov, Head of the Ukraine Commission on Journalism Ethics and Commission Members