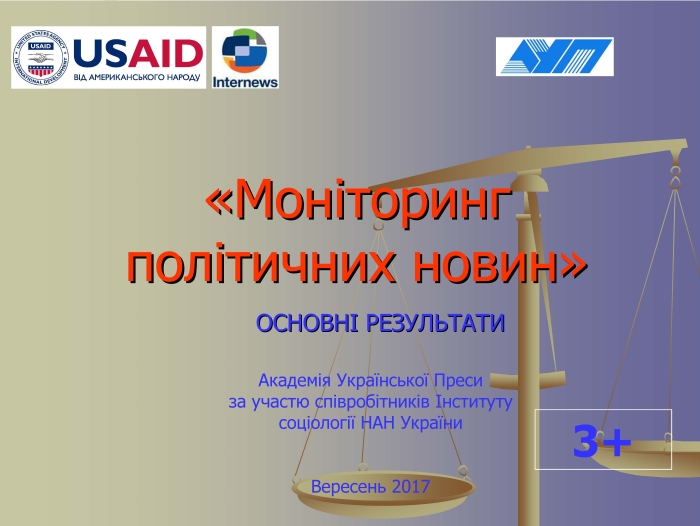 The Academy of Ukrainian Press (AUP) conducted prime-time news research (19:00-23:00) into seven Ukrainian TV channels: ‘Inter’, ‘1+1’, ‘Ukraiina’, ‘STB’, ‘ICTV’, ‘UA:The First’ and ‘Channel 5’ based on a content analysis method with participation of scientists from the Institute of Sociology in the National Academy of Science of Ukraine.

According to AUP, the reliability of information reported by Ukrainian TV channels was guaranteed by a high proportion of reports (54%) originating from reporters at the actual news scene and 48% of references made by journalists citing official sources; An indirect sign of unreliability is the share of Facebook and Twitter messages that cannot be verified (12%, increased from 4% in the previous year).

Separating facts from commentary: evaluative commentary on behalf of channels and journalists (TV anchors, correspondents) are identified in 26% of all messages (according to AUP’s monitoring in May, 2017 – 37%); The most percentage was 32-36% (TV channel “Ukraiina”, 1 + 1), and the least was 8-17% (UA: The First Channel and Channel 5).

Balance: 15% of messages contained several points of view on events (in AUP’s monitoring of May, 2017 it was 17%, in February, 2017 – 15%); in posts with a link to Facebook and Twitter two points of view are expressed almost twice as often

The political bias of channels was present due to the political preferences of their owners and editorial strategy. While covering Ukrainian politics in the news of September, 2017, the imbalance of attention and direct speech in favor of the ruling coalition and the executive power decreased to some degree if compared to the same data received in the period of May and February, 2017. The phenomenon of “common” guests is investigated, when people were regularly invited to speak on air (basically at Ukraiina and Inter TV Channels).

The most frequenttopics featured by Ukrainian TV channels were socially important and concerned: internal state policy and government activities, crime (ranked second for the first time), and war in the East.According to AUP, all three monitorings of 2017 show that the share of stories on countering corruption is falling down comparing to the previous year. The situation on territories uncontrolled by Ukrainian government is completely uncovered.

Total share of reportages originating from reporters at the news scene makes 54% out of all news about Ukraine, however, the percentage is ranging from 75% and 67% at the TV channels 1+1 and Ukraiina respectively to 30% at Channel 5. Another reliability indicator is the link to official sources that makes 48% (from 54% in the news of Inter and ICTV to 36% at 1+1).

The share Facebook and Twitter messages that can not be verified (12% of news) as well as those containing a link to “undefined source” (2%) or where sources are not given at all (3%) is considered as doubtful or potentially unreliable. Total share of such doubtful messages is 17% (in May, 2017 it was 15%). The most of them are featured at UA: The First (20%), STB (18%), Inter (15%). Thus, every 6th message in the news of September can contain non-verified or unreliable information (in the monitoring of February 2017 – every 5th message was so).

According to AUP, severalalternativeopinionsonmaineventofthemessagewerecoveredgenerallyin 15% ofnews. However, this percentage concerns only expressions on air or citing but not journalist’s speech. InthepreviousAUP’s monitoring of 2017 this percentage was following: 17% in May; and 15% in February.TV channels are ranging according to this indicator from 20% at STB and 1+1 to 10% at UA: The First. While featuring the scandal or ambiguous events, the share of messages with several opinions is considerably increasing (up to 60-100%). Forexample, protests against constructing new buildings in Odesa – 100%; trial on shooting in Kniazhychi – 75%; trial on treason of V. Yanukovych – 67%. In case if an event is covered as the main topic, the opinion balance in going down in favor of one opinion (88% vs. 12%).

Messages with the links to Facebook and Twіtter are more frequently used for presentation of opinions in news. In this case the indicator of “two or more opinions” is increasing twice (percentage of such messages in news: 28% in September, 2017; and 31% in May, 2017).

Ukrainian TV news coverage reflects a misbalance of attention and direct speech in favor of the governing authorities and the Verkhovna Rada’s majority coalition. However, it is less in September than in May and February.

In the first week of May, the attention to government political configuration elementsfrom Ukrainian TV news was the following: the ruling coalition, 49%; the democratic opposition, 15%; the opposition, 7%; and other political parties and movements, 29%. The opposition received most attention at ICTV (14%) and Channel 5(9%).

Ukrainian TV channels are significantly different according to political preferences of their owners and editorial strategies. In September, the most attention was given to Petro Poroshenko’s Bloc, 33% (in May, 2017this percentage was 32%; in February, 2017 – 24%), the People’s Front, 14%, representatives of central governmentauthorities, 12% (in May, 2017 it was 11%; in February, 2017 – 22%).

The phenomenon of “common” guests is investigated in prime-time news, when people are regularly invited to speak on air: O. Liashko at TV channel Ukraiina (4 days per week); Y. Boiko and S. Kaplin at Inter (5 and 4 days respectively per week); O. Honcharenko at TV channel 1+1, and M. Burbak at Channel 5 (3 days per week). Direct speech of Y. Tymoshenko in September. 2017 made 77 seconds (in May it was absent, in February, 2017 it was 80 seconds). Thus, segmentation of news programs by access of political actors to live broadcast air confirm stable political preferences of TV channels for the last years.

Conflicting and negative tone is prevailing in most of the topics, and only the topics of sport, culture and entertainment, as well as reforms in Ukraine contain mostly positive expressions. In general, conflicting manner of discussing the events decreased from 52% in February, 2017 to 45% in May, 2017 and to 44% in September, 2017. Conflicting and negative tone in news coverage is mostly typical to Inter, 55% (in May, 2017 it was 60%), and less typical to UA: The First, 37% (in May, 2017 it was 38%).

War in the East

The attention to Ukraine’s armed forces was prevailing and received 13% of television broadcast news (in May, 2017 this percentage was 11%). 8% of television news coverage addressed the governance organizations (in May, 2017 this percentage was 14%). Russia and its government received 11% when in May, 2017 it was 14%. Also 4% of attention went to the military formations DPR (“Donetsk People’s Republic”) and LPR (“Luhansk People’s Republic”).

In September, 2017, it was reported about refugees and displaced people less than in May and February, 2017 (0,5% vs. 2% and 1% respectively). The share of news about civil people and those suffered from the conflict in the East is falling down from 9% in February, 2017 to 5% in May, 2017, and to 2% in September, 2017. The Normandy Format was not mentioned, however, the perspectives of UN peacekeepers’ presence in Donbas were discussed.

Positive television news coverage of Ukrainian nongovernmental organizations and volunteers comprised 67% of airtime when in May, 2017 it was 40% and in February, 2017 – 43%. However, the share of attention to them decreased from 3% in February, 2017 to 1% in September, 2017. Civilians in Ukraine’s East are usually featured objectively. The so-called Donetsk and Luhansk People’s Republics, the Russian government and Russia’s armed forces are largely covered negatively by Ukraine’s television news media.