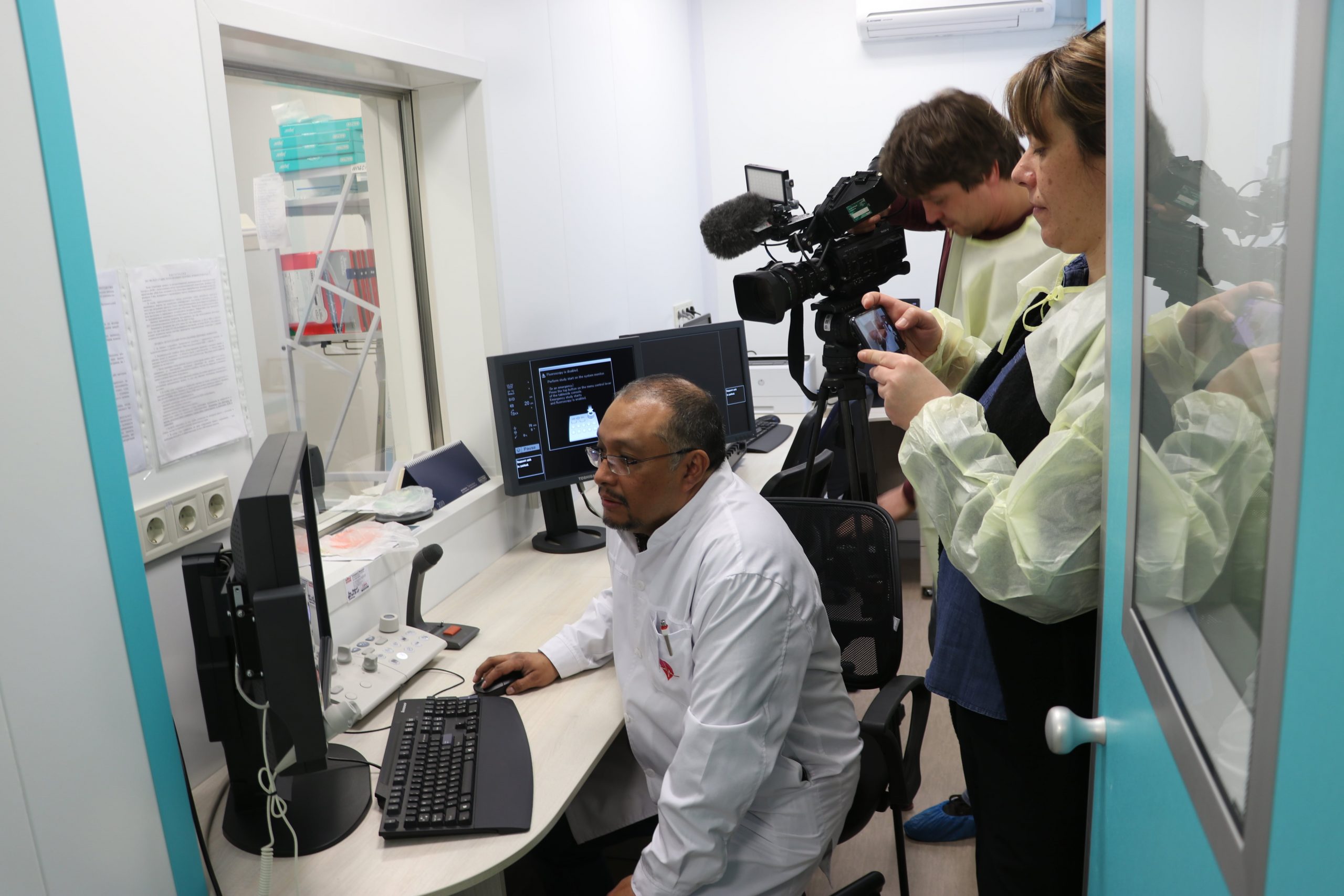 FOREIGN MEDIA ARE GOING TO COVER UKRAINE THANKS TO AUP

On January 17 – 22, 2020, the Academy of Ukrainian Press (further AUP) had an honor to invite representatives of foreign media to participation in the project “Press Tours to Ukraine” which is realized due to the support of Media Development Foundation, the Embassy of the USA to Ukraine.

Top reporters from Latvia, Croatia and Denmark, who work on different media platforms, visited Kyiv and several towns of Donetsk region controlled by Ukrainian government later on. All the series of press tours are aimed to demonstrate the real situation and events taking place in our state, including the eastern part of the country, to foreign reporters; to introduce the perspective vision of national experts in different fields of development and opinion of society on various issues. 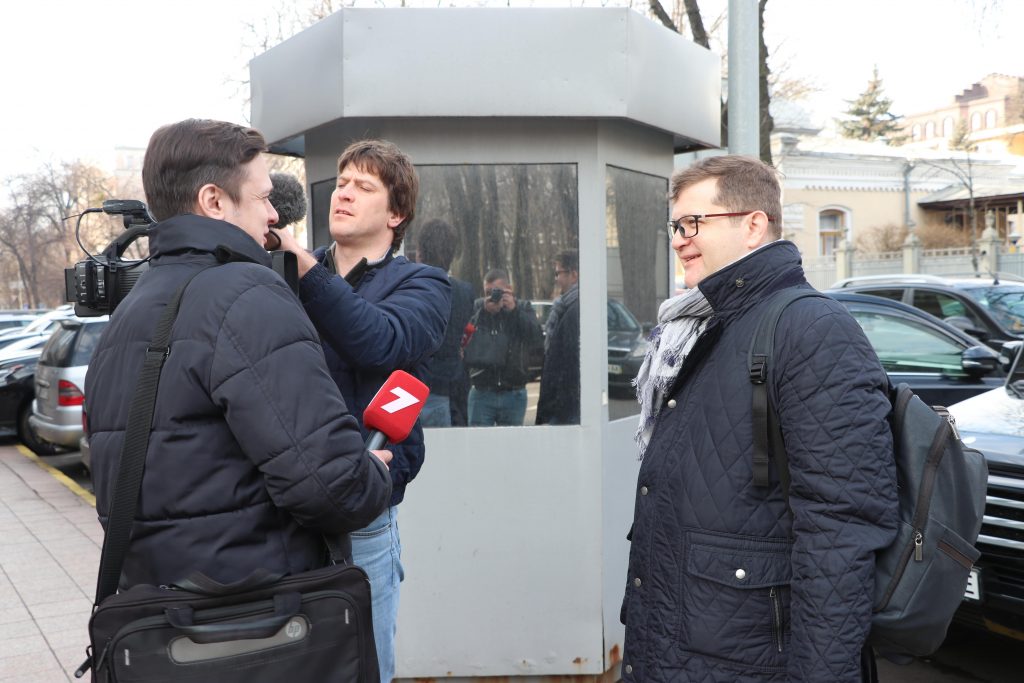 Participants of the 5th press tour in February, 2020 became:

On February 18, 2020, tour participants met with Volodymyr Ariev, MP (European Solidarity Party), chairman of Ukrainian delegation in Parliament Assembly of Council of Europe, PACE Vice-President (2015), President of PACE Committee for Culture, Education, Science and Media. Mr. Ariev outlined general political situation in the country and Ukraine’s position on the international area.  He also mentioned that current Ukrainian government should better defend the national interests of Ukraine on all levels, especially on the sideline of multinational events. 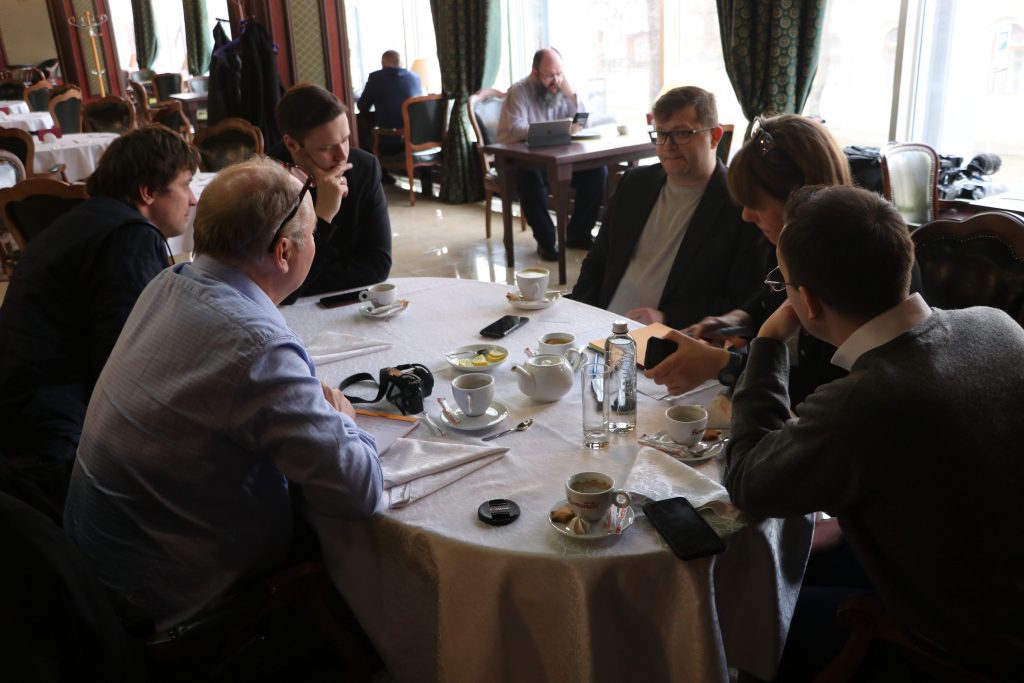 Then, our group visited the National Union of Journalists. Lina Kushch, its First Press Secretary, outlined the freedom of expression issues, the ways of countering impunity among Ukrainian authorities, illegal detainment and persecution of Ukrainian reporters by the Russian Federation and occupational administration, newspaper privatization reform, etc. We have also discussed the cases of a journalist’s assassination, the second one in Europe for the recent time. Participants received English language handouts with analytical data and findings on Journalists’ Physical Safety Index. 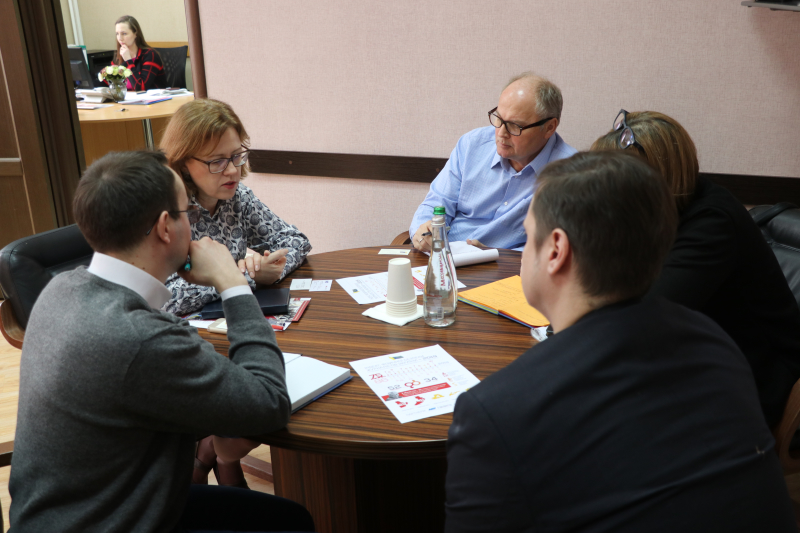 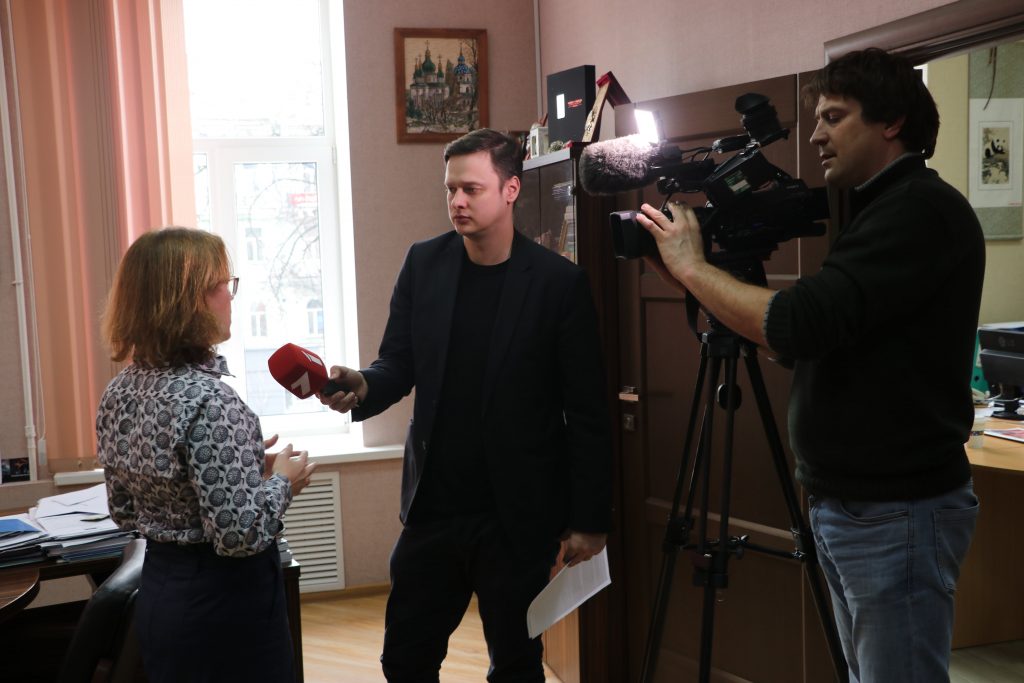 Afterwards, the journalists spoke to Oleksii Pohorelov, President of Ukrainian Media Business Association, who explained the modern trends of media development in Ukraine, outlined general media landscape, and the ways of democracy development within Ukrainian media. We have also discussed the problem of media ownership, biased content, privatization of newspapers. Some critical aspects of new draft laws on media and on misinformation were introduced. 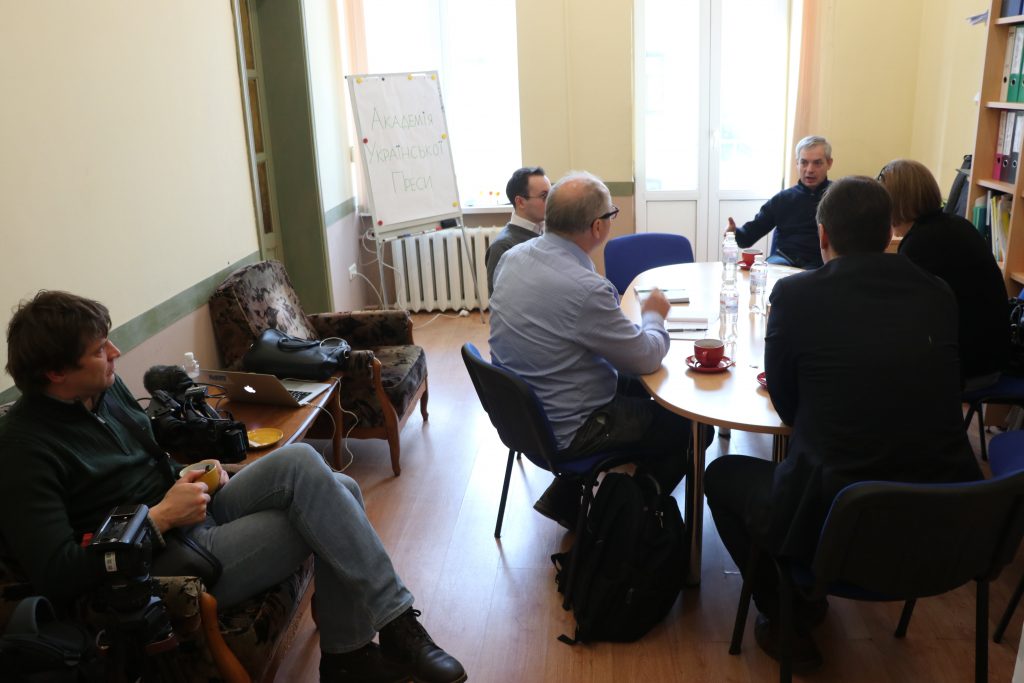 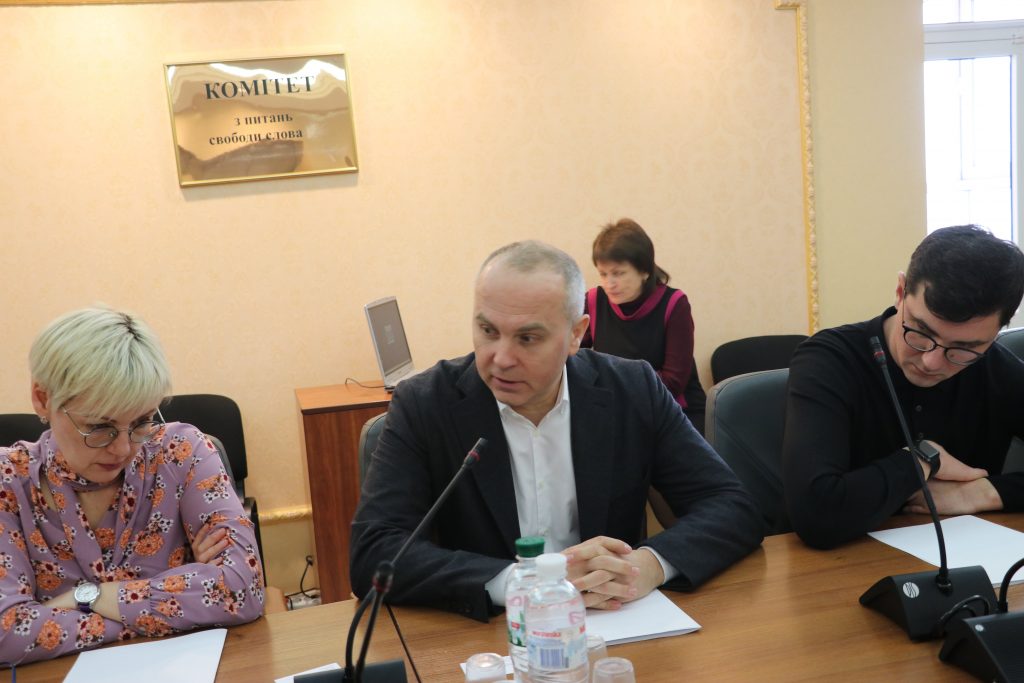 In particular, Nestor Shufrych, Committee Head, told: “It happened so in Ukraine’s history that the main media outlets belong to oligarchs or receive funds from foreign grants…From this perspective, it is quite hard to talk about independence of Ukrainian media. I understand the government’s concerns towards certain media. Due to at least some freedom of media, they came to power…President is aware of media power.”

Whereas, Tetiana Tsyba explained the situation with the draft laws on media and on misinformation: “The draft law on misinformation was proposed by the Ministry of Culture. At this time, Verkhovna Rada does not have a text of this draft law. Nor was it discussed by our Committee…Even though, this draft law is important, the way it was presented would rather damage freedom of speech than solve the issue of misinformation…I do not agree with the Head of our Committee, Nestor Ivanovych, on the point that the law on media fails to withstand scrutiny. For example, the visual and audial media representatives remark that the draft law is really progressive and capable to address the issues that the EU demands from Ukraine to solve. It provides the tools for regulation of audial and visual content in media”. 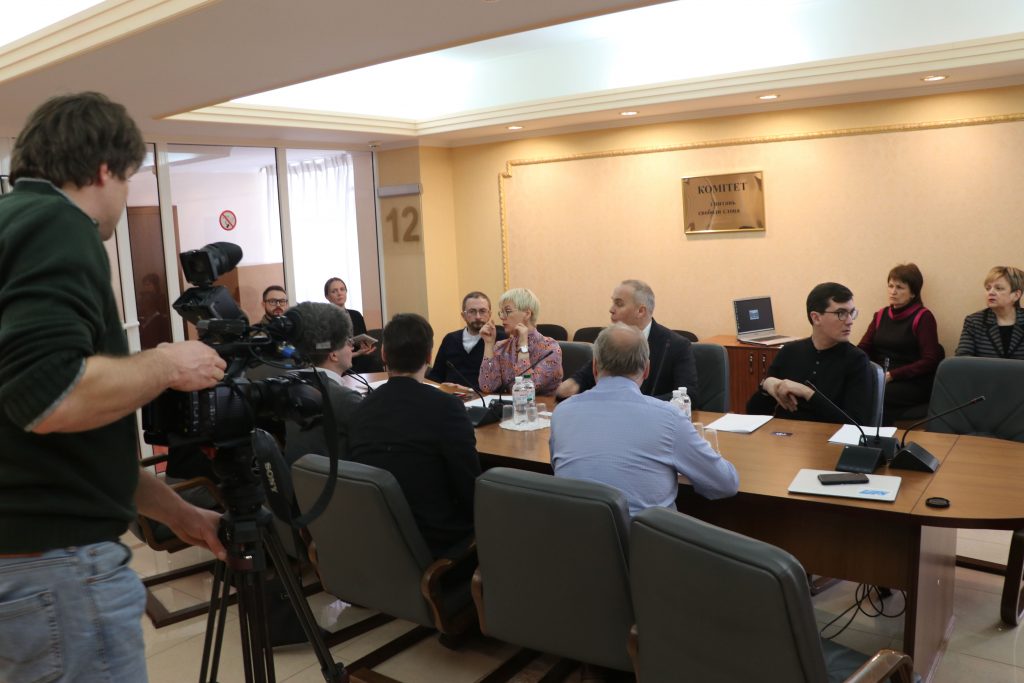 At the end of the day, the journalists had a conversation with Liubomyra Mandzii, vice-Minister of Education and Science of Ukraine. The vice-Minister outlined the course of educational reform development, in particular the New Ukrainian School (NUS) concept providing the transfer from the knowledge-based education into the skills-based one. This, in turn, requires the change of content and adoption of new education standards on all levels. There also exists a distance learning course, especially helpful for those students remaining on the occupied territories, so that they could go through the Ukrainian curriculum and receive the legal certificate at the end. On February 19, 2020, journalists and organizers travelled to the east of Ukraine. First of all, we visited new well-known places of military glory around town Kramatorsk. Our local guide, Alexander Kachura showed us the place where Ukrainian soldiers on July 4, 2014 stopped the enemy’s armored column breakthrough. Participants observed the memorial build in honor of fallen fighters. Then, we visited another memorial in honor of Sloviansk liberators. After that, the reporters observed hospital buildings ruined by war. Later, we arrived to the spot where on June 6, 2014, Ukrainian reconnaissance aircraft was hit by separatists. Only 3 out of 8 pilots survived after the catastrophe. 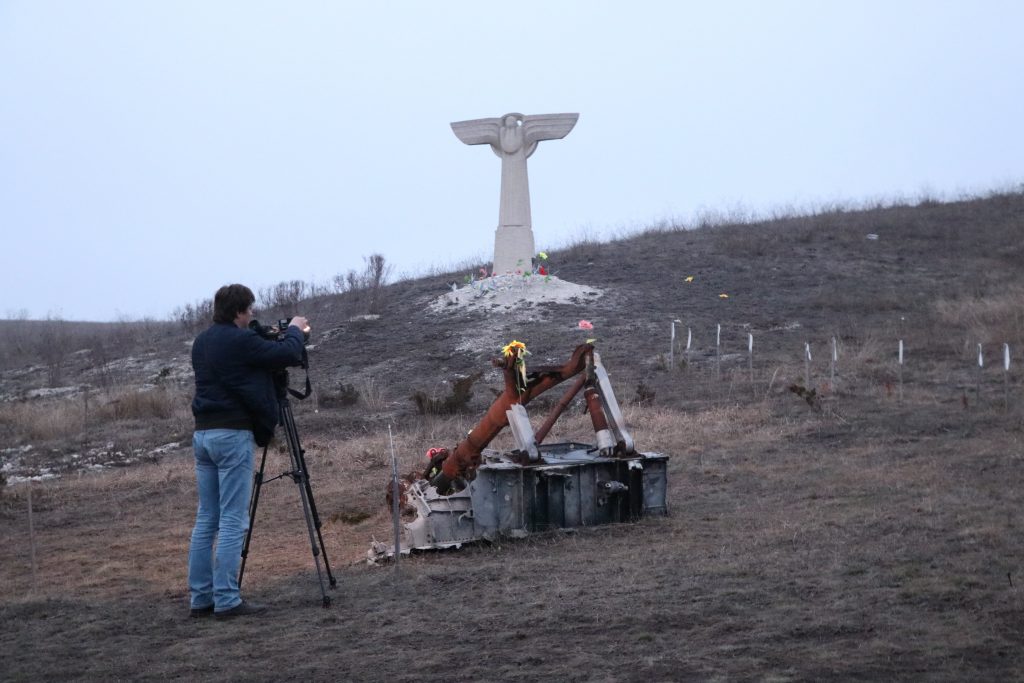 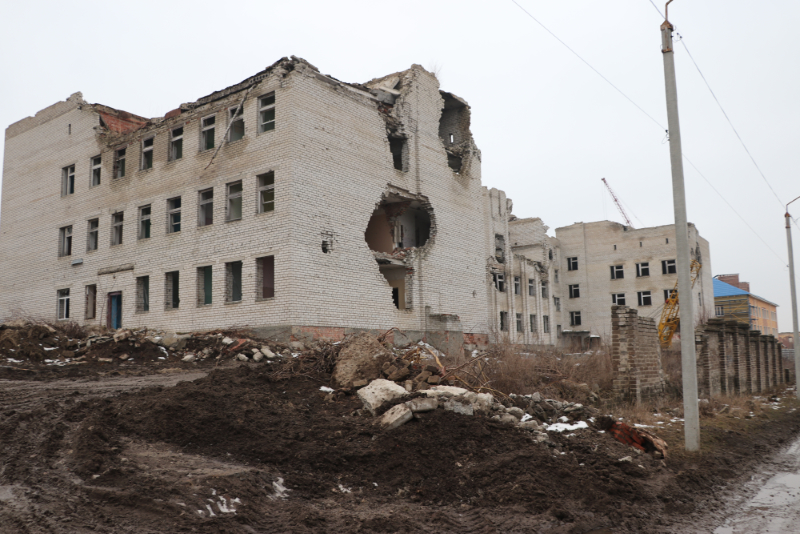 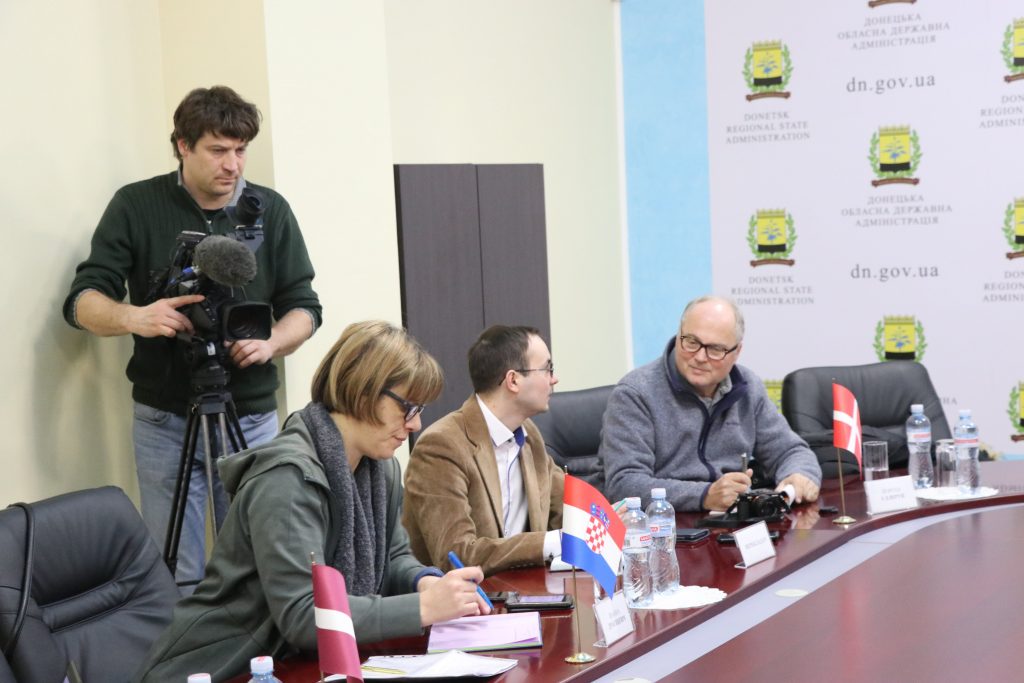 In the end of the day, the group of journalists visited village Druzhkivka near Kramatorsk. Military chaplain, (Rev. Fr.) Dionisius showed us the basement rooms where people were detained as captives during the occupation. Anatoliy Vodolazkyi, National Hero of Ukraine, told how he marched in 2014 to the central square of then occupied Druzhkivka with the national flag of Ukraine, was snapped by separatists and taken to the torture chambers. Other witnesses told the journalists about the events taking place during the occupation. Now, it is planned to establish the museum in the premises of former jails and torture rooms of so called “DPR”. We also had a local tour guide, Dmytro Bilko, with us who showed us the memorial places to those who died for the independence of Ukraine. 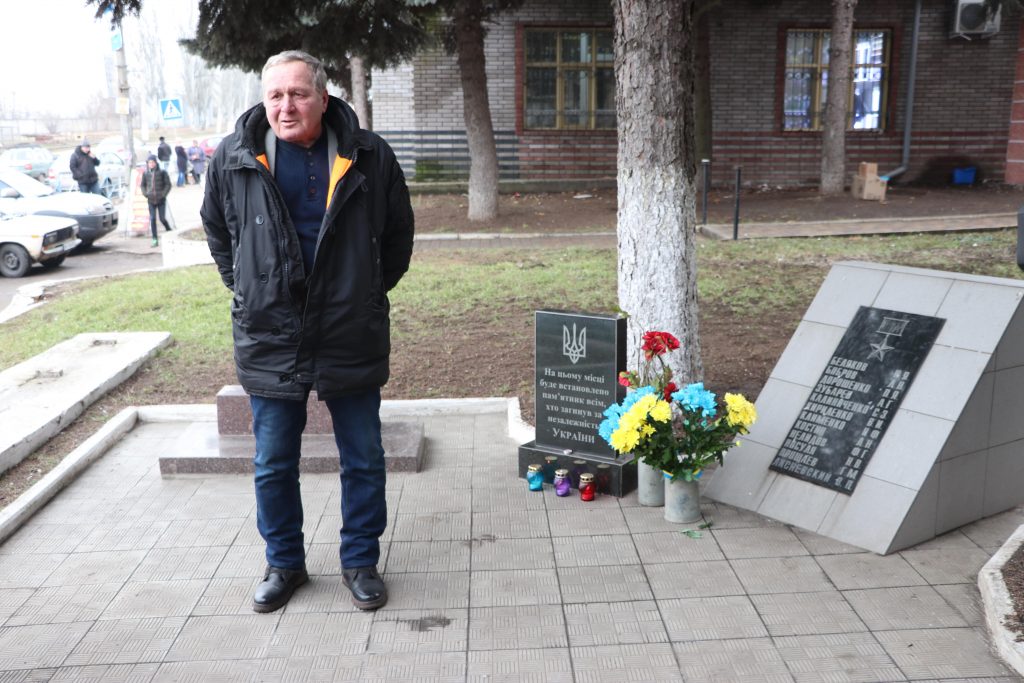 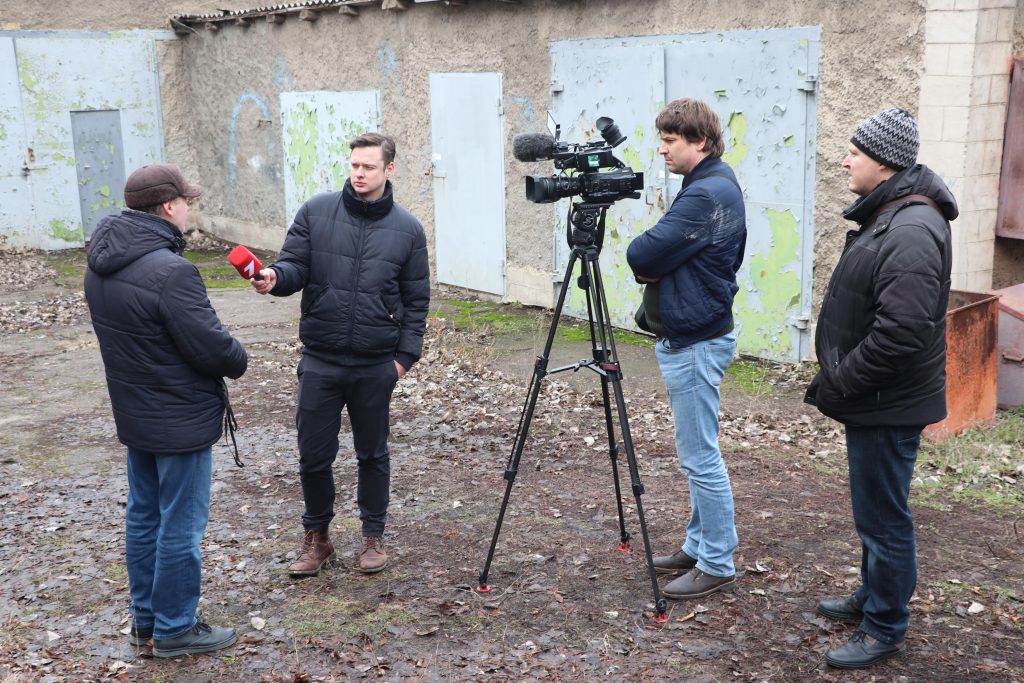 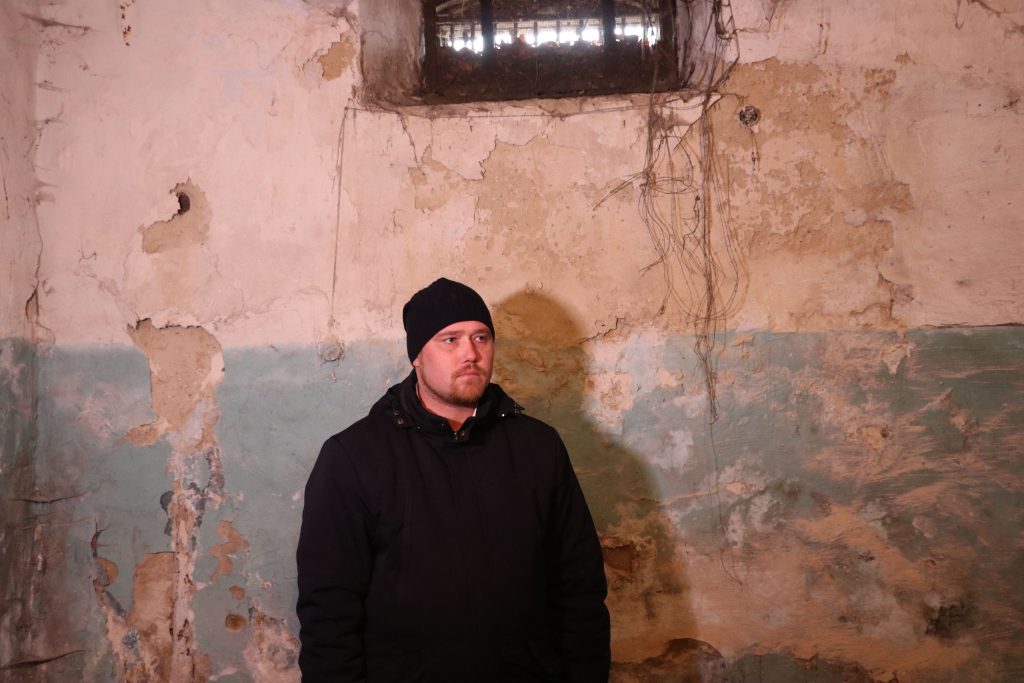 On February 20-21, 2020, after our arrival to town Mariupol, we visited Azov Shiprepair Yard. While talking to Larysa Konieva, Press Service Head, we were convinced that not only quality ship repair is taking place here, but they also have all the possibilities to build new vessels. We have discussed the cooperation with international ship-owners, activity during the war, Kerch Strait blockade, and the situation, when despite of cancellation of huge contracts because of entering risks, the enterprise still provides services to different types of vessels, involves new experts and has industrial potentials. 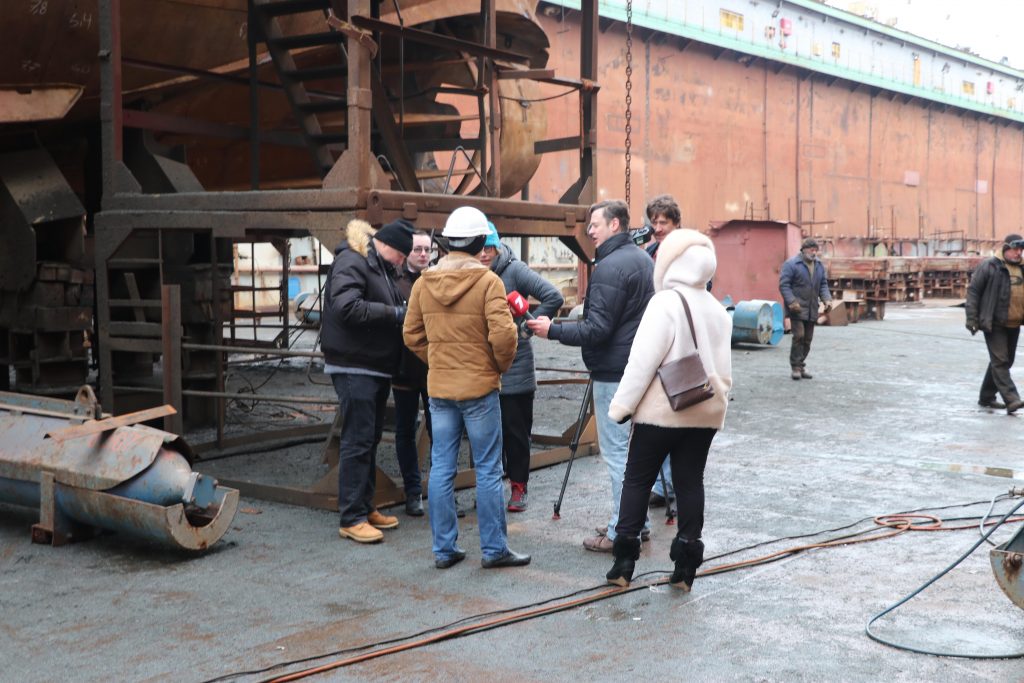 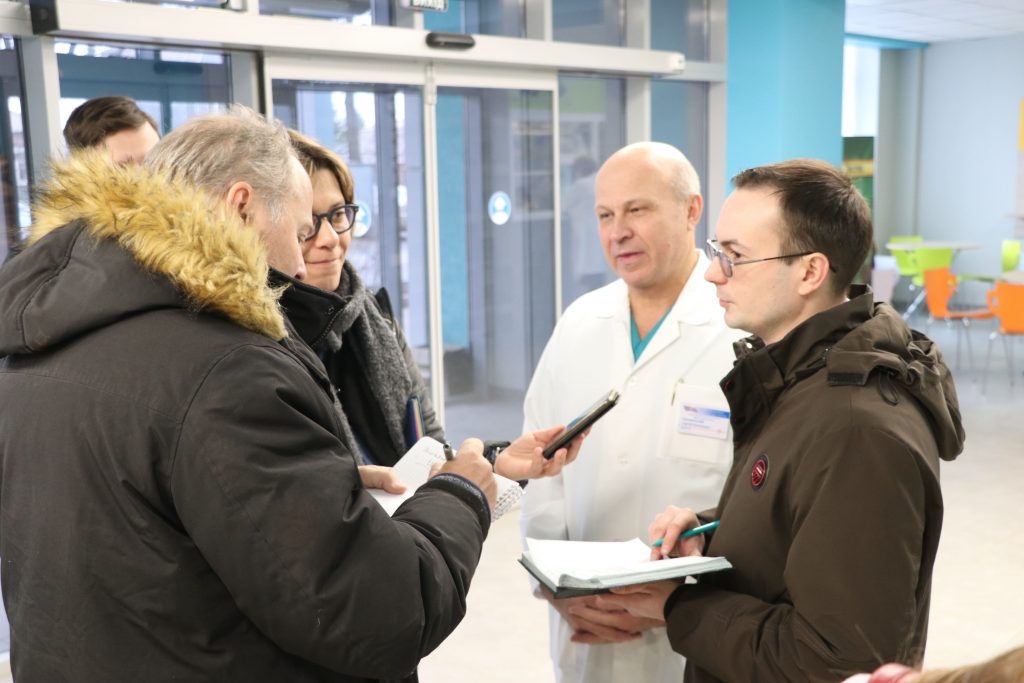 Afterwards, the reporters met Serhii Orlov, deputy mayor on activities of local executive bodies, in the building of Mariupol Municipal Council. The speaker told about strategy of town development till 2021, implementation of social programs for citizens and internally displaced people, level of citizens’ satisfaction with comfortable life in the town. 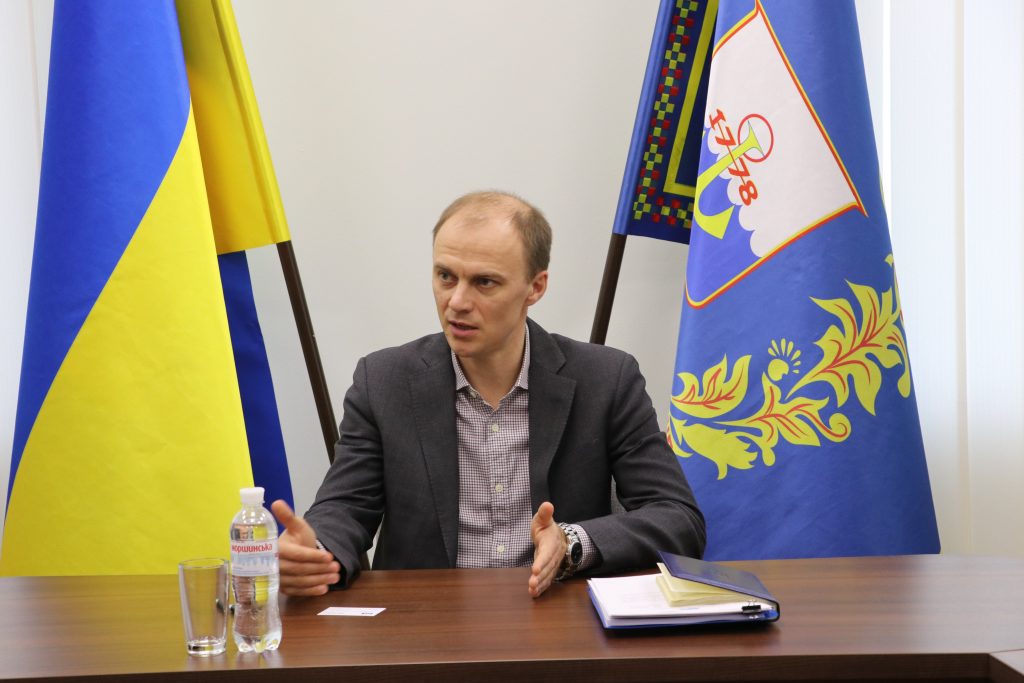 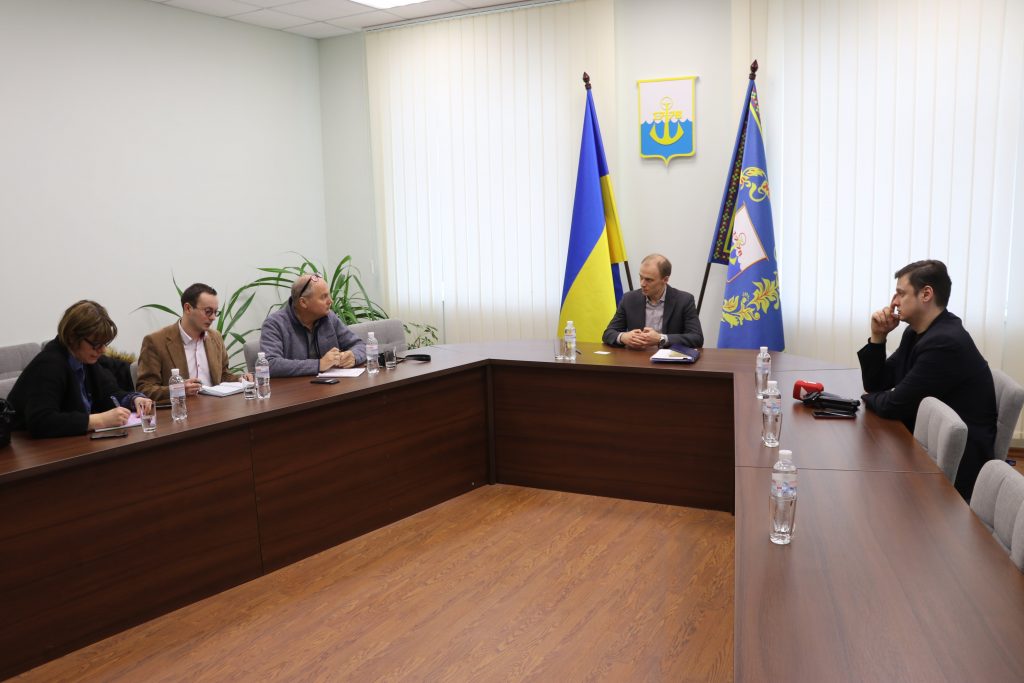 Our next destination was the Mariupol State University, where our journalists met with Iryna Petrova, vice-President on research and educational activity and Svitlana Bezchotnikova, dean at the Philology and Mass Communication Department. The academicians told foreign guests about the programs, opportunities and scholarships provided to internally displaced people, as well as international exchange programs. The guests could see an example of classic university development in a town not being regional center. 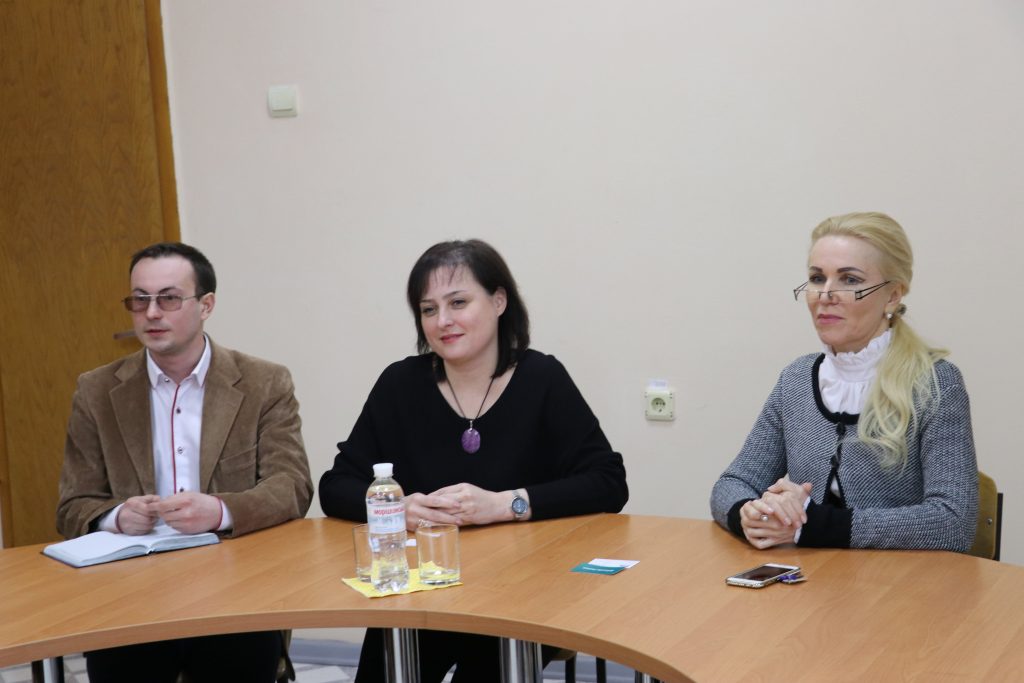 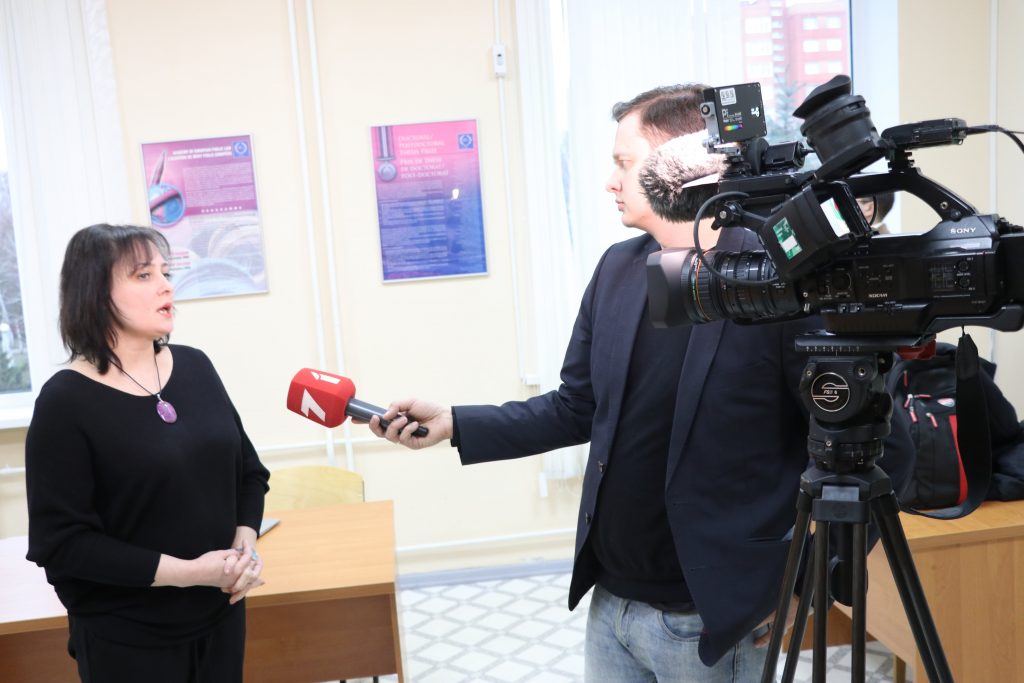 On February 21, 2020, our speaker was Oleksii Godzenko, press secretary of 503 battalion of marine corps (naval infantry). He told us about the recent situation on the frontline; supply, equipment and the fighting spirit of Ukraine’s Defense Forces; the events of 2014 when there was an attempt of city occupation by separatists, etc. His vision of resolving the war in Donbas is never surrender. “Love Ukraine or get a f*** out of it,” reads the claim on a T-shirt of infantry soldier and press-secretary. 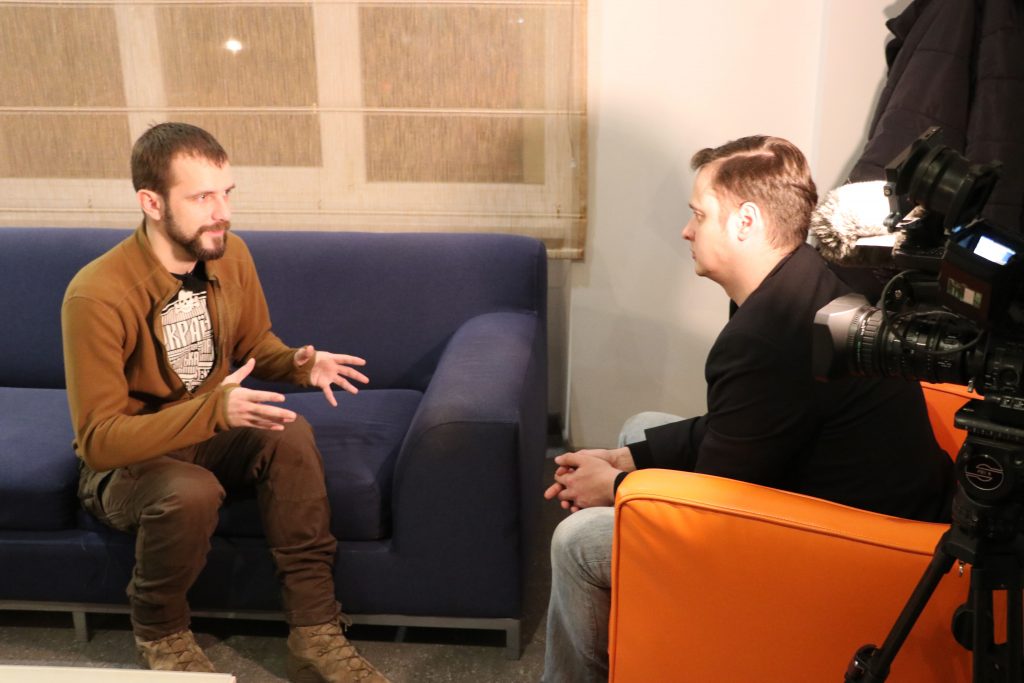 The Academy of Ukrainian Press with the support of Media Development Foundation, Embassy of the USA to Ukraine, is involved in ultimately efficient and trustworthy informing of the foreign colleagues on events in Ukraine. Join us! The world has to know the truth and avoid fakes. 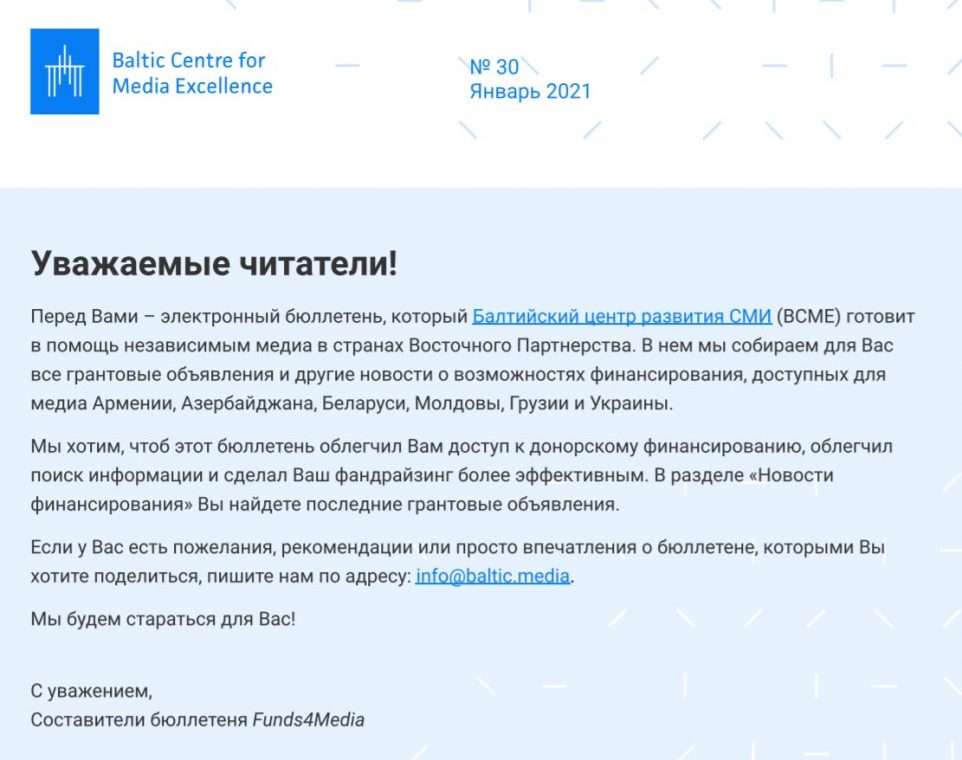