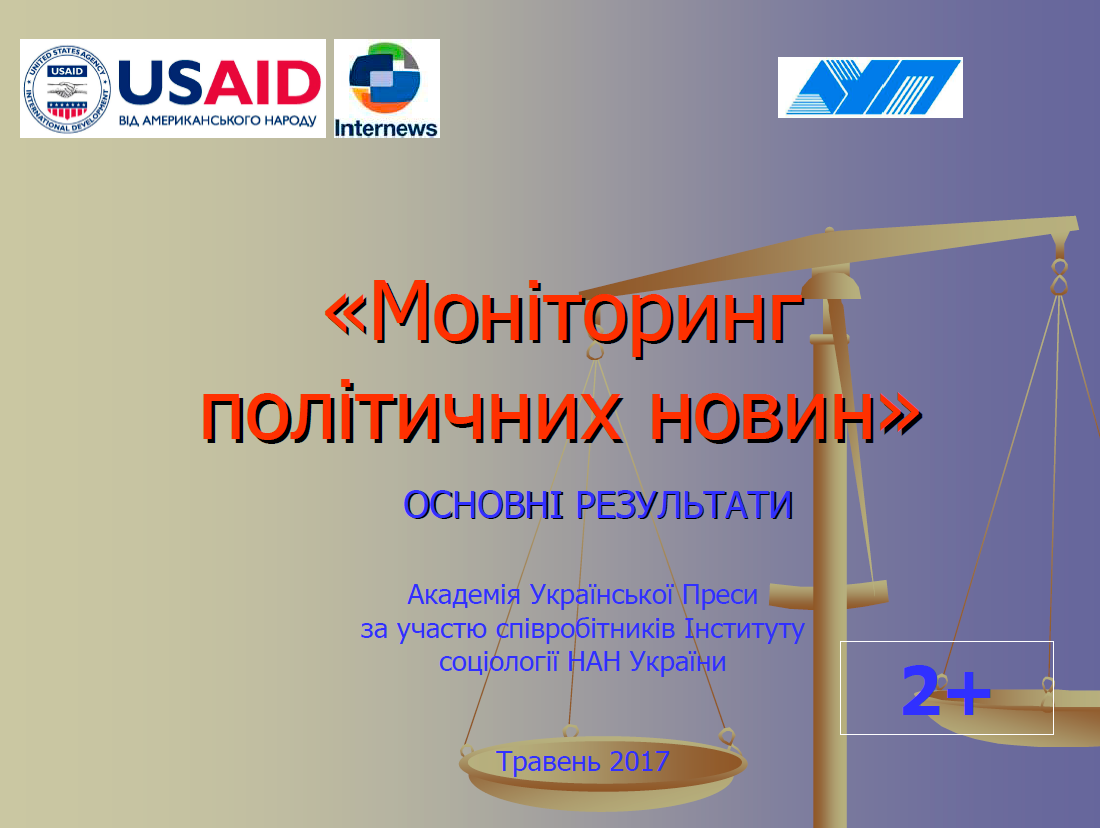 NEW PROGRAMS FOR THE THIRD ANNIVERSARY OF ATO

The Academy of Ukrainian Press in partnership with scholars of the Institute of Sociology, NAS of Ukraine has conducted the research applying the content analysis of  prime time news (19:00 -23:00) at seven leading Ukrainian TV channels – ‘Inter’, ‘1+1’, ‘Ukraina’, STB, ICTV, UA: The First and the 5thChannel.

Reliability. According to the AUP, in May 2017, 60% of information reported by Ukrainian TV channels originated from reporters at the news scene (typically more reliable information) and 44% of references made by journalists cited official sources. In February 2017, 52% of television reporting originated from the actual news scene and 46% of TV news reporting cited official sources.

The share of broadcast reporting referring to Facebook and Twitter information (that can have doubtful reliability as an information source) increased 2.5 times compared to 2016. AUP’s monitoring noted this social media indicator grew from 4% in 2016 to 10% in February 2017, and declined to 9% in May 2017. UA: Pershyi (15%) and Inter (12%) sourced social media most often in May 2017.

Separating Facts from Commentary. In May 2017, most commentary was reported by journalists (37%) and ordinary citizens (36%), according to AUP. Expert commentary does not exceed one quarter of opinion reporting. This percentage has remained the same since 2016.

In total, AUP monitoring shows that political news in Ukraine included at least two opinions 17% of the time.
AUP discovered that political news in Ukraine referencing Facebook and Twitter is almost more than twice as likely to provide multiple opinions during the latest monitoring period; 31% of coverage. In February 2017, the percentage of news with multiple opinions referencing social media was 26%.

Multiple opinions in news, which refer to social networks as sources are most often found on the channel 1+1, at 60% of coverage. Inter, at 15% of coverage, was the least likely.

The share of broadcast news including multiple opinions while covering scandal and sensitive events and developments, increased significantly in the latest monitoring period from 50% to 80%. For example, in 80% of the coverage about Vitaliy Sediuk’s trial (he invaded the stage at the contest’s grande-final in Kyiv to disrupt a performance by 2016 Eurovision winner Jamala. Sediuk has become known for assaulting a number of celebrities at events such as film premieres and awards ceremonies.); alternative viewpoints were presented by Ukrainian broadcast news.

Sixty-three percent of broadcasts aired differing points of view in covering the topic of double-citizenship of some Ukrainian politicians who possess passports of other countries, though double citizenship is forbidden by the law of Ukraine. And, 46% of coverage about cutting off access to Russian social networks included differing opinions.

Less inflammatory descriptions from Ukrainian broadcast news channels of participants in the Donbas war persist. According to AUP’s monitoring in May and February 2017, Ukrainian conflict participants are more frequently labeled as ‘military people’ – 8% percent of television broadcast time – and, 6% of stories covering the Donbas conflict referred to Ukrainians as ‘soldierly’ and ‘those (who) suffered in ATO zone’.

Ukraine’s enemies in the Donbas were labeled as ‘terrorists’, and ‘militants’ in 11% of broadcast coverage; ‘Russian troops’ and the ‘aggressor’ in 7% of coverage; and, the ‘enemy’ in 5% of news, according to AUP monitoring.

All detailed information regarding this research can be found at AUP website www.aup.com.ua