Home News release NEWS IN THE BEGINNING OF POLITICAL CAMPAIGN 2019 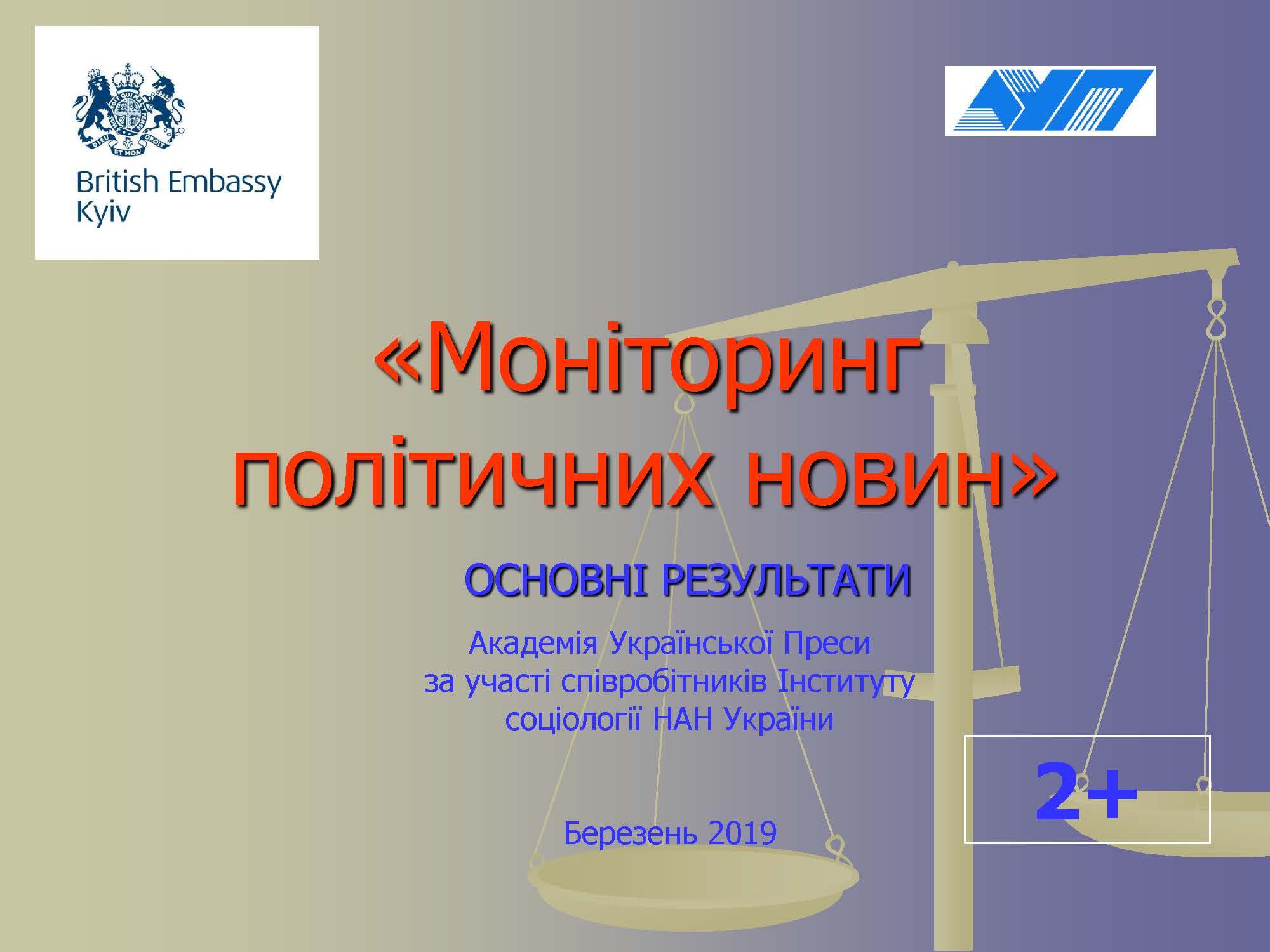 NEWS IN THE BEGINNING OF POLITICAL CAMPAIGN 2019

The Academy of Ukrainian Press (AUP) conducted research of prime-time news (19:00-23:00) covered by seven leading Ukrainian TV channels: ‘Inter’, ‘1+1’, ‘Ukraiina’, ‘STB’, ‘ICTV’, ‘UA: The First’ and ‘Channel 5’ based on the content analysis method with the participation of scientists from the Institute of Sociology, National Academy of Science of Ukraine.

Trends of prime-time news for March 2019:

SUMMARY. The share of political news in Ukraine is the largest in television news programs of all channels in March. All the other news about Ukraine traditionally prevail at 1+1 channel. Channels vary in intensity of attention to political news. The main sources of information are scene correspondents. Attention to the presidential election increased from 18% in February to 22% in March, 2019. The TV channels are varying according to the share of attention while covering the elections 2019. Each third message about Ukraine is referring the topic of election campaign at such TV channels as: “Inter”, “ICTV”, “Ukraiina”; each eleventh  message was broadcast by UA: The First; and each twelfth by Channel 5. News mentioned 17 presidential candidates out of 44, registered by the Central Election Committee (CEC) (39% comparing to 34% in February). The most frequently reported campaigns were of Y. Timoshenko, O. Vilkul, P. Poroshenko, O. Lyashko. The highest attention in news was paid to political candidates P. Poroshenko, Y.Tymoshenko, O. Lyashko, O.Vilkul, Y. Boyko. Anatolii Hrytsenko was discussed only in a positive and neutral context; Yulia Tymoshenko and Yurii Boyko received a minimum of ironic and negative messages. Yurii Tymoshenko and Yevhenii Muraiev were mostly mentioned in ironic and negative colors. The highest share of news broadcast time have P. Poroshenko, O. Vilkul, O. Lyashko, Y. Tymoshenko, Y. Boyko. Over the last 2 months, Volodymyr Zelenskyi has been taking direct speech only in news of 1+1. Channels are highly segmented in accordance with their own political preferences.

Interior state policy (8%), social sphere (9%), and presidential elections (16%) were the most often mentioned as the main and additional news topics in the 1st week of March. Comparing to February, 2019, the share of reportages about the confrontation with corruption as the main and additional news topics increased in twice from 6% to 13%. Among particular events, it was mostly reported on crimes, car accidents, fires (11%; in February: 6%); sport and culture: 10% (in February: 11%); war in the east (7%; in February: 10%), the case with Ukraine’s Defense Industry (6%).

You can find all the detailed information for the above research on the AUP site www.aup.com.ua

The monitoring became possible due to the financial support of the Embassy of the Great Britain in Ukraine as part of the project “Monitoring of Ukrainian TV news during Presidential Election Campaign”, conducted by the Academy of Ukrainian Press. The views expressed in the materials belong to their authors and may not coincide with the official position of the Government of the Great Britain.