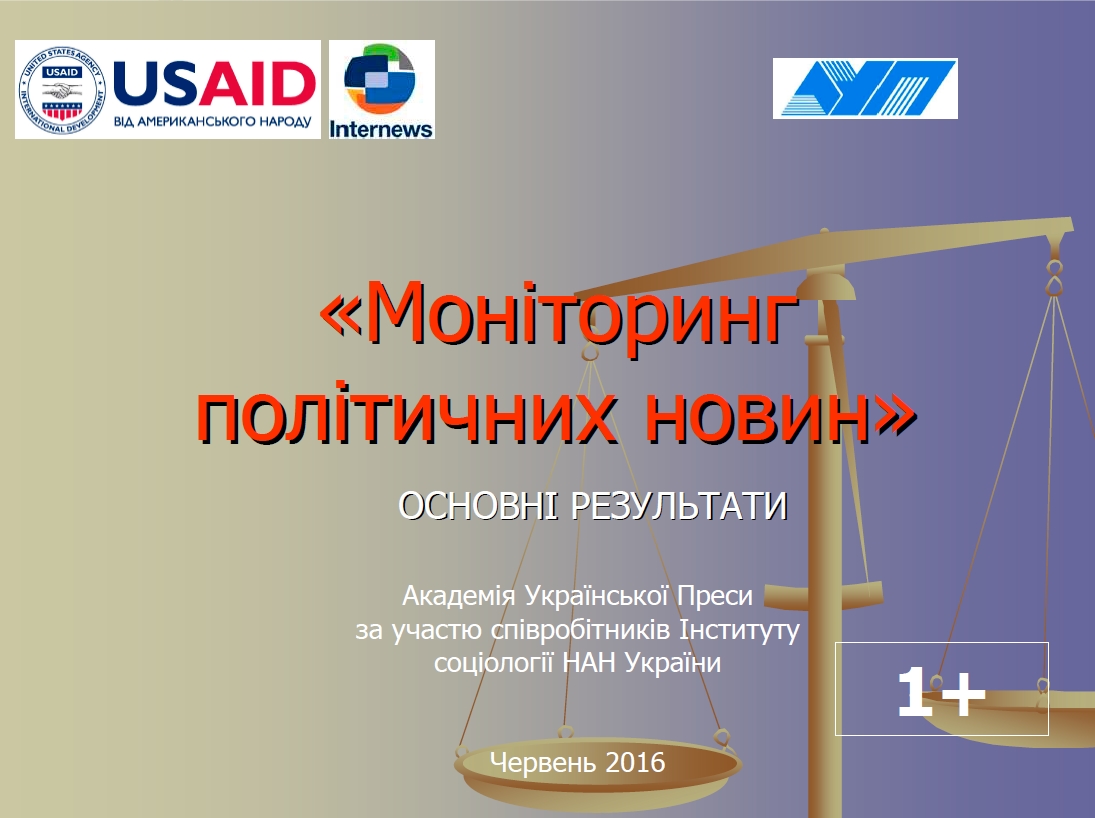 The Academy of Ukrainian Press conducted the research with participation of scientists from the Institute of Sociology of Ukraine, National Academy of Science, applying the content-analysis method to prime-time news (19:00-23:00) of seven top Ukrainian channels – ‘Inter’, ‘1+1’, ‘Ukraina’, STB, ICTV, UA:1 and the 5th Channel.

Official sources are more frequently used as the information sources (49% versus 28% in October, 2014, 44% in September 2015) than ATO commanders and militants as well as ATO speakers (3% versus 9% and 8% respectively). As earlier, the channel’s own correspondent is leading (53%).

[1] From Ukrainian part, among the conflict participants the most attention is given to the government and its structures (34%, last year in September 22%) as well as armed forces (15%, 19% last year). From another part, the attention is given to civil people of Eastern regions – 7% (5% in September 2015), to Russia and its authorities (7%, минулого року 8%), to military formations DPR and LPR – 5% (last year 6%).

It is most frequently reported about civil people, refugees and displaced people at ‘Ukraina’ Channel, about volunteers at 1+1 Channel, about the armed forces of Russia at the 5th Channel.

From Ukrainian part, the most positively mentioned are civil society organizations and volunteers – 26%, captives from Ukraine (20%). Civil people from the East are predominantly assessed neutrally (94%, last year in September 91%), and illegal military formations DPR, LPR as well as Russia, its authorities, Armed Forces of Russia are assessed negatively from 2/3 to 100%.

Ukrainian conflict participants are most frequently nominated as patriots, activists, volunteers, people of good will (8%), and the nomination became more unified. The opposite side, as in the previous year, was called as terrorists, militants, mercenaries and bandits (12%), however, the nominations became more miscellaneous.

16 main events were discussed in September news from different points of view. A fight near Lviv Municipal Council (83%) and corruption in Mykolayiv Regional Administration (the case of M. Romanchuk, 46%) were introduced mainly in negative color.

Among political parties the most attention was given to central authorities – 20% (last year in September 21%), representatives of P. Poroshenko Bloc – 14% (last year -18%), Narodnyi Front (‘National Front’), Samopomich (‘Self-reliance’) and Batkivshchyna (‘Motherland’) – each 6%. The most attention at UT-1 Channel is given to Central Election Committee, the Highest and Constitutional Court (26%).

All detailed information about the mentioned research can be found at AUP website under this link  www.aup.com.ua in section ‘Monitoring’.

This research was conducted due to the support of the American people given by the project of U.S. Agency for International Development (USAID) – ‘U-Media’ that is carried out by the international organization Internews. The contents expressed in materials are the responsibility of the Academy of Ukrainian Press and do not necessarily reflect the views of USAID, U.S. Government and Internews Network.