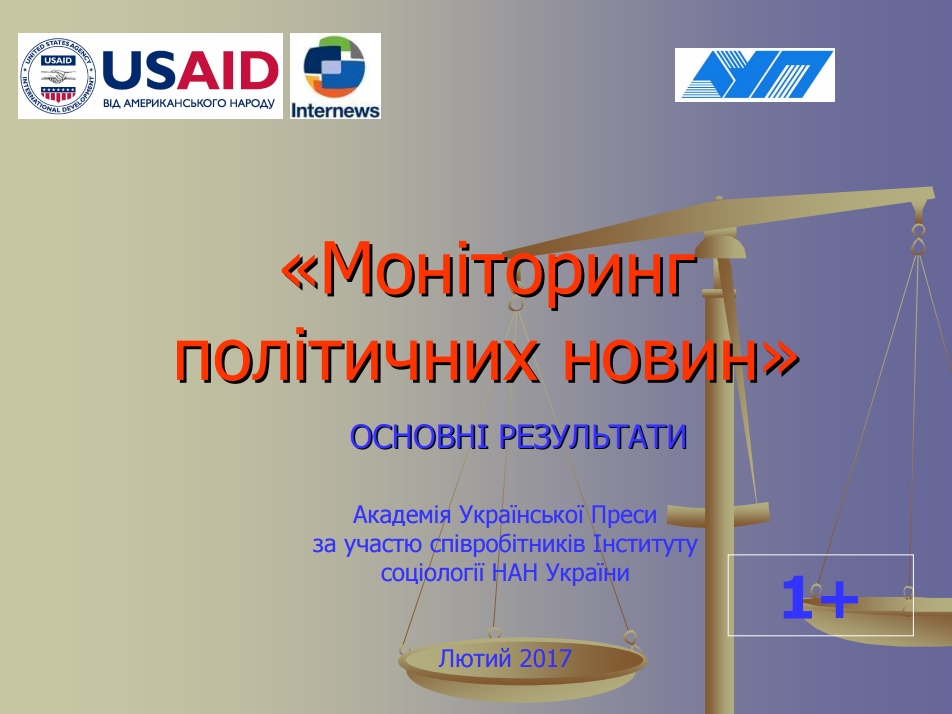 NEWS PROGRAMS ON THE 2nd ANNIVERSARY OF MINSK AGREEMENTS -2

The Academy of Ukrainian Press in partnership with scholars of the Institute of Sociology, NAS of Ukraine has conducted the research applying the content analysis of  prime time news (19:00 -23:00) at seven leading Ukrainian TV channels – ‘Inter’, ‘1+1’, ‘Ukraina’, STB, ICTV, UA: The First and the 5th Channel.

In the first week of February, 40% of news program messages were related to political events in Ukraine (in September, 2015 – 46%, in June, 2016 – 32%). It is hardly the first time for the whole period of observation when the channels do not differentiate according to this indicator.

Four events are in the focus of news week attention – consequences of shelling in the East (11%), weather (7%), criminal, fires, road accidents (7%), situation in Avdiyivka (6%).

It was most frequently reported about refugees and volunteers at UA: The First and STB, about civil people at ‘Ukraina’ channel, about Russia, DPR and LPR at 1+1 and Inter.

From Ukrainian side, the most positive mentioned were civil society organizations and volunteers – 43% (previous year 26%). Civil population in the East of Ukraine is assessed mostly neutral, and illegal armed groups DPR and LPR, Russia and its public authorities, Armed Forces of Russia are covered negatively from 2/3 till 100% as in the previous year..

Ukrainian conflict participants were most frequently labeled as ‘army men, military forces’ in line with patriots and volunteers – 12%. Labeling of the opposite side was negative, as in the previous year, (13%), but in line with terrorists, militants, mercenaries, bandits (12% in June 2016) appeared more neutral and official images (‘aggressor, enemy, Russian occupying forces’). Thus, naming became less emotionally colored.

Most events are interpreted in news categorically. In coverage of scandal or ambiguous events, the news share with several opinions is significantly increasing (to 50-80%; for example, ‘Fight between S. Leshchenko and I. Melnychuk in Verkhovna Rada’ – 83%, ‘Situation after increase of minimal salary’ – 75%). If an event is mentioned as additional in the context of the main one, the opinion balance indicators are significantly deformed in favor of one opinion (94% vs. 6%).

Official persons and citizens (each 32%) are commenting the events – this tendency has been remaining since the previous year.

The leaders of attention to political organizations in news programs are BPP – 4%, People’s Front and Opposition Block – 3% each. BPP received the most positive (4%) and negative (1%) assessments. Samopomich was mentioned only in a positive context.

52 politicians and public officials had the broadcast share more than 35 seconds (in June, last year – 48 people and 20 seconds). The most broadcast share had P. Poroshenko and V. Hroysman – each 10%, O. Lyashko – 8% (88% of his broadcast share was at ‘Ukraina’ channel).

Among the political parties, the most attention was paid to P. Poroshenko Block representatives (24%, last year 14%), representatives of central governmental structures – 22% (in June last year – 20%), People’s Front – 7% (last year 6%). In contrast to last year, the attention is given to DPR and LPR member.

All detailed information regarding this research can be found at AUP website www.aup.com.ua